CANON project and the Cajal Institute of the HBP's Mouse Brain Organisation Subproject will develop a common approach to integrate anatomical data into models of cortical function.

The first steps to strengthen the collaboration between CANON project and researchers of HBP Subproject (SP1) “Mouse Brain Organisation” were taken at the Cajal Institute of the Spanish Research Council (CSIC) in Madrid (Spain) on March 22, 2018.

CANON is a Partnering Project of the Human Brain Project that investigates the canonical organisation of neocortical circuits for sensory integration. It is coordinated by Umberto Olcese and Conrado Bosman at the University of Amsterdam.

Bosman explains that CANON is collecting electrophysiological data on the microcircuital bases of sensory processing in cortical areas.

“Specifically, we are focusing on the columnar organisation of cortical sensory responses in mice and ferrets”.

Their research is tightly linked with the work of laboratory of HBP senior scientist Javier de Felipe at the Cajal Institute, which is focused on studying the anatomical architecture of the cortical column. 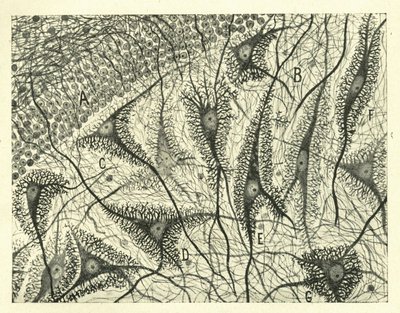 “We aim to investigate how the distinct types of neurons that compose the network architecture of the cerebral cortex communicate with each other, and we will focus on primary sensory areas - where information from the different senses (vision, audition, etc.) arrive, and on association areas, where these are integrated”. 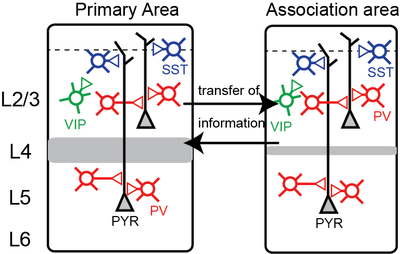 This figure shows the schematic architecture of the areas being studied. In each area, different neuronal types (excitatory neurons, in grey, and multiple types of inhibitory neurons, in color) are distributed in different layers across the cortex, and communicate with each other in a precise, highly structured manner.

Both teams focused the discussions on how to integrate the activities performed in CANON within SP1 objectives, especially to develop a common approach to integrate anatomical and functional data. This applies to currently ongoing experiments and, importantly, to future experiments. By developing a common experimental platform, they will be able to generate a unified anatomo-functional dataset that will be essential to develop more detailed and realistic models of cortical function.

Specifically, the results that CANON observes concerning neuronal responses in the mouse sensory cortices indicate the presence of distinct functional subpopulations, whose anatomical determinants are totally unclear. Within the networking meeting, both research teams discussed how to collaborate to investigate the anatomical determinants of these functional properties. They also arranged concrete collaboration plans for the next months as well as long-term strategies.

Partnering Projects are research and/or innovation projects funded by regional, national, European and other sources (e.g., private industry). The concept was introduced by the European Commission to define the principles by which research teams or organisations, which are not part of the HBP consortium, can be integrated by providing flexible and efficient mechanisms to perform research and innovation activities, which are in line with the overall HBP objectives and be of mutual benefit to all parties.

SCOPE have supported the travel costs of both Umberto Olcese and Conrado Bosman within the grant scheme available for PPs of the HBP.

Funded by the EC, SCOPE is providing support to institutions and researchers involved in PPs and to AMs by granting travel grants for HBP events and workshops. Also by communicating their research results to the society and the media, in collaboration with the HBP communication channels, SCOPE will help to raise awareness about the accomplishment of the HBP goals in terms of scientific leadership, economical and societal benefits.

This is an edited version of a piece produced by the SCOPE Project.<o:p></o:p>