Philosopher Kathinka Evers does not think there is a sharp dualism between the unconscious and the conscious. Rather, the leader of the Human Brain Project’s Neuroethics and Philosophy Group, and the Ethics and Society Subproject (SP12) sees consciousness as a continuum.

"According to the model we developed", says Evers (pictured left), "the distinction between consciousness and unconsciousness is not discrete, but understood in terms of the intrinsic predisposition of the brain to evaluate and model the world.”

Consciousness is described as a continuum where some levels are connected to awareness and others are not and the brain is considered to be inherently conscious, extending down to levels that are eventually very basic and non-reflective.

“This view is not less complex than the traditional way of defining consciousness as clearly distinguished from and even opposed to unconsciousness, but it offers a different theoretical framework that is simpler and clearer because it conceives the brain as a unified reality with different levels of the same conscious activity. This framework is potentially useful in clinical contexts, e.g. for providing more refined diagnoses and better management of patients with disorders of consciousness."

This philosophically monistic approach, that Evers' group labelled the Intrinsic Consciousness Theory, is scientifically and epistemologically parsimonious: the object to investigate is one (the brain as an evaluative organ with consciousness as a fundamental characteristic), and there isn’t any gap within it between different incompatible dimensions, but only a relative and gradual differentiation between modalities of the same (empirical and metaphysical) reality.

Evers is one of the keynote speakers at the HBP’s upcoming International Conference on Consciousness (Barcelona 21-22 June, 2018). Her work on consciousness comes from traditional analytic philosophy that is also deeply informed by empirical research. She works closely with HBP neuroscientist Jean-Pierre Changeux, whose theories on the brain helped shift the idea of the brain as a ‘black box’ that simply processed input-output signals.

“According to Jean-Pierre and others, the brain is intrinsically and autonomously active: even in the absence of external signals it develops spontaneous representations and evaluates them, striving to build meaningful representations of the world, in what has been described as its projective style.” (Changeux J-P. Neuronal man: the biology of mind. New York: Oxford University Press; 1986)

According to this theory the brain produces and tests so-called pre-representations to see how well they fit - both with previously established presentations and with the external environment in which the brain operates. If there is a good fit it is stabilised as a representation and a model, if it doesn’t fit then it is discarded.

"Our conceptual hypothesis", says Evers, "is that consciousness should be defined in connection to this intrinsic predisposition of the brain to model and simulate the world in order to assign it values, i.e. to check the world’s salience to the brain’s needs. This propensity is inherent to the architecture of the brain, and raises a complex flow of feedforward and feedback loops. We conceive consciousness as an unalienable dynamic configuration of organic life, which entails that consciousness can only be completely lost by dying. Cogito ergo sum is thus reversed into Sum ergo cogito: I am therefore I think."

Evers says research on consciousness has traditionally focused primarily on awareness, and comparatively less on the activities that are typically labelled "unconscious". However, the latter can be very rich, as recent research in neuroscience and psychology is making increasingly apparent.

And sometimes, she says, when we are interrupted, we can make active intentional use of these collaborative levels. Imagine, Evers says, that you are doing something professionally which is very intriguing, e.g. you are trying to solve a mathematical riddle when suddenly your young child comes up and says hey, I am hungry, I want some pancakes. 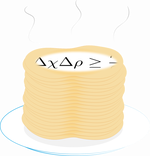 “While you are being a kind parent and making the pancakes you can dedicate some part of your brain to continue doing the mathematics, though this has now been ‘shifted down’ to a lower level, below that little tip of the mental iceberg that is your attention span. And when you come back, your good deed completed, you may well find that the analyses have advanced in the meantime. This is not an unusual experience,” she says.

The collaboration between neuroscience and philosophy is relatively new. Only a few decades ago philosophy eschewed empirical perspectives while neuroscience took little interest in philosophy.

To Evers this was a problem and while the philosophy of the mind was deeply interesting to her as a student she was frustrated by the lack of empirical perspectives. The contrast to philosophy of physics - the topic of her PhD-thesis - is sharp, since physics and philosophy are historically very close.

Yet it has only been within the recent decades that science has begun to take an interest in consciousness as a subject for serious scientific pursuit.

“In the earliest stages of the 20th century you had behaviourism which completely discarded and rejected mental terms as improper for scientific study, the mind was pejoratively labelled "the ghost in the machine", and only behaviour was to be studied. Then came functionalism in the middle of the century, apparently to mind's rescue, but in a lopsided manner: functionalism not only took scant interest in the brain but also focussed strongly on how we solve logical puzzles, leaving emotions out in the cold, so in terms of understanding the human mind and its complexity, it was an unsuccessful pursuit. It was the combination of neuroscience getting involved in studying consciousness and philosophy becoming more open to once again studying natural sciences, including neuroscience, that brought about a theoretically more promising environment, which made me want to pursue neurophilosophy, as it is now known.”

Evers and her team continue to refine their model of consciousness [recent papers here and here ] - probing it for weakness “which is what we do as philosophers, we need to find the weakest links in the theories we develop, to improve their conceptual clarity, explanatory power and usefulness. For example, do we want to avoid panpsychism (here, the view that consciousness is a feature of all living things)? If so, we need to develop a further limiting condition for its possession”.

As for how the continuum may be experienced, Evers believes education, upbringing, and self-improvement also influence and shape the lower levels of consciousness.

“The different levels of consciousness are not disconnected but interact dynamically. This is an important aspect of education, upbringing and self-improvement. When, for example, we want to become calm self-controlled individuals we don’t aim to become self-controlled individuals only with respect to one situation in one moment. No, we want to create our personalities – of which a very large part is not subject to our active awareness ­– to be disposed for self-control always, in most situations. In upbringing, when you say to a child "Don’t hit your little sister in the head with the hammer" you are not saying don’t do it now, you are saying don’t do it ever; in fact what you are probably saying is you shouldn’t really want to do this. We mould personalities not least on the so-called unconscious levels.”

The model also raises serious ethical issues, particularly around the treatment of patients suffering disorders of consciousness (DOC). Recent studies of DOC patients use neurotechnology to assess residual consciousness in DOC patients that traditional behavioural diagnostic criteria are unable to detect. The results have in some of these patients revealed residual mental capacities that show an urgent need to strengthen the development of new diagnostic tools and more refined diagnostic criteria, as well as continuous assessment of the residual consciousness in DOC patients, and (if applicable) interpret their 1st person experiences.

Evers also believes there is likely to be a diverse experience of consciousness within humanity.

“Seeing that the phenotypical variation between individual brains is very pronounced, I think that our experiences of the world are likely to be also highly individual. Even though of course we communicate with each other, I think that we communicate far less than we think we do and that we live in our own subjective bubbles. We are in a manner of speaking prisoners of our brains and cannot ever get away from our own subjective filter.”

And while she says that consciousness may remain ultimately mysterious she also believes the HBP can be truly instrumental in advancing our understanding of the field.

“And the main reason I say that is that I can see how genuinely intellectually curious some of the people are that I presently collaborate with; they are listening to other theoretical perspectives, they are very positive to combining theory and practice, conceptual as well as empirical analyses. So it is a constructive and pluralistic atmosphere. We may hope that the HBP will be instrumental to producing that big leap we all wait for: a scientific revolution in the sciences of mind!"

*The HBP’s International Conference ‘Understanding Consciousness: A scientific Quest for the 21st Century’ will be held in Barcelona on 21-22 June 2018. 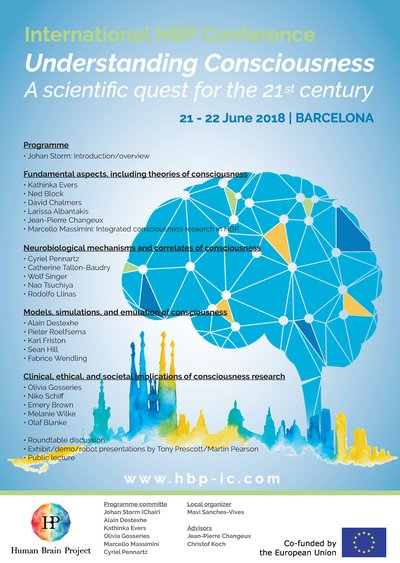 The International Conference on Consciousness is being held in Barcelona on 21-22 June, 2018.

Early bird registrations are open until May 3.

The Intrinsic Activity of the Brain and Its Relation to Levels and Disorders of Consciousness, Michele Farisco, Steven Laureys, and Kathinka Evers

The ethical relevance of the unconscious, Michael Farisco and Kathinka Evers

The quest for consciousness: Marcello Massimini

Read more about the Human Brain Project’s Neuroethics and Philosophy Group, and the Ethics and Society Subproject.