The HBP Partnering Project CerebNEST, in collaboration with the researcher Prof. Egidio D'Angelo (University of Pavia, Italy - UNIPV), leader of the Data-driven Model Reconstruction and Refinement in the HBP Brain Simulation Platform, and his group, have published a joint paper in “Frontiers in Neuroinformatics”. Their discoveries focus on the validation of a simplified neuron model for cerebellar Golgi cells. Simulations of realistic single neuron dynamics of the cerebellum have been implemented as a result of a strong synergy with neurophysiologists from UNIPV. This model will be used to investigate diseases linked to neuronal disorders. 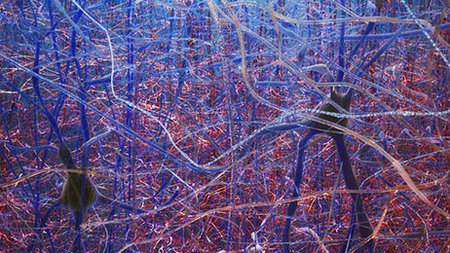 Alice Geminiani, main author of the publication and researcher at the CerebNEST project in the NearLab of the Politechnic University of Milan (Italy), explained to the SCOPE Project what this new simplified model entails.

The HBP Brain Simulation Platform (BSP) allows to conduct investigations that are not possible experimentally. How does it benefit your discoveries?

In the paper, we describe the development, optimization and validation of a simplified neuron model from the Generalized Leaky Integrate and Fire family. Despite being a point neuron model, the one we have developed is able to reproduce realistic spiking patterns depending on the input stimulus it receives; and the computational load of simulations is not increased (like it happens for the detailed multi-compartment neuron models). This is important for simulations of the cerebellar circuit, because it is known that cerebellar neurons exhibit multiple and complex spiking patterns that impact on network activity and learning. With the current work, we are able to simulate also realistic single neuron dynamics.

For the validation of the model, simulations of single neuron activity have been carried out in collaboration with the BSP. The model and the optimization/simulation tools and code developed in the paper are going to be integrated in the BSP in the following months, as an additional tool to be used by the community.

How are you solving that challenge for modern neuroscience with this simplified scale of neural models, as explained in the paper?

We proved that it is possible to summarize single neuron properties, including oscillations and resonance, in simplified models without compromising the computational load of simulations. This is a fundamental step for realistic multiscale models where not only network and learning are bioinspired, but also neuron responses. The integration of our neuron model into spiking neural networks reproducing the cerebellar microcircuit (which is ongoing) will allow to bridge the gap across scales, from neurons to motor behavior.

Together with other simplified neuron models depending on the application, the one presented in this work could be applied to the simulations of other brain regions.

Which regions of the brain could you simulate with this neuron model?

For example the hippocampus, or the regions where neurons are supposed to generate oscillations, like some nuclei in the brainstem. This is facilitated by the fact that the NEST simulator was used to develop and test the model. Extending realistic single neuron dynamics to other regions (while keeping the limited computational load) is fundamental towards functional large-scale simulations of the whole brain. In fact, single neuron properties are supposed to impact on communication between brain areas and signal encoding.

What is the impact in the advancement of tackling some neurological diseases?

The possibility to simulate realistic single neuron dynamics in cerebellar large-scale models paves the way to increased realism of simulations and reliability of simulation outcomes, with impact on the prediction capability of models. Especially in view of simulating pathological conditions (that were done also in this previous joint paper with UNIPV), we here added the possibility to investigate alterations due to diseases also at the neuronal scale, which now we have the potential to simulate and study.

For example, alteration of single neuron properties have been found in some types of spinocerebellar ataxias (shown in animal experiments). We are currently simulating only alterations at connections or plasticity mechanisms, evaluating also the impact at single neuron level.

Partnering Projects (PPs) are research and/or innovation projects funded by regional, national, European and other sources (e.g., private industry). The concept of a PP was introduced by the EC to define the principles by which research teams or organisations, which are not part of the HBP consortium, can be integrated by providing flexible and efficient mechanisms to perform research and innovation activities, which are in line with the overall HBP objectives and be of mutual benefit to all parties.

Funded by the EC and coordinated by the Spanish Foundation for Science and Technology (FECYT), the SCOPE project is providing support to institutions and researchers involved in PPs and Associated Members by granting travel grants to attend HBP events and workshops. Also by communicating their research results to the society and the media, in collaboration with the HBP communication channels, SCOPE is helping to raise awareness about the accomplishment of the HBP goals in terms of scientific leadership, economical and societal benefits.

So far, FECYT has written 14 news articles that have been published in the communication channels of HBP (website, social networks and newsletters). 12 Partnering Projects and 13 researchers have been funded with travel and registration grants by SCOPE.