An update on outreach events held by the HBP in Italy, The Netherlands and Great Britain.

On March 2 the DutchBrain event took place at de Rode Hoed in Amsterdam. The goal of the meeting was to better inform and involve the Dutch neuroscience community in the work of the Human Brain Project (HBP). About 70 attendees from all parts of the Netherlands enjoyed presentations by HBP researchers, NWO, and the executive director of HBP, Chris Ebell.  The audience, a mix of researchers, students and non-academic stakeholders, was updated on the vision and progress of the diverse HBP scientific and platform Subprojects. HBP and NWO representatives also informed the attendees about the various opportunities that exist for collaborating with the HBP.

Such opportunities include becoming a HBP Partnering Project, through funding provided in FLAGERA calls, and with the assistance of SCOPE. Alternatively, researchers can get involved by applying to the various HBP open calls; and also through the new HBP voucher program, due to begin in 2018.

The programme also featured posters and booths from HBP students and partners, as well as an interactive session in which the audience could provide feedback to the HBP and ask questions during a lively panel discussion with the HBP director and some of its project leaders. Overall, the meeting was well-received by attendees and HBP representatives, and could well be followed up with a future edition sometime in the next few years.

​On March 13, 2018, the University of Pavia hosted the meeting "Human Brain Project: the endeavour of neuroscience". This was the first outreach event of this kind in Italy and was intended to disseminate the project concepts to the scientific and non-scientific communities at large. The Human Brain Project, the European flagship that has raised interest for a new approach to brain investigation, is entering its fifth year of activity. The project aims at generating large-scale models of brain functions and promises advances in prevention and cure of brain diseases as well as in neuro-informatics and technology.

There are several Italian groups involved at various levels in this endeavour. At the event, the Italian leaders showed how their activity integrates in vital nodes of the Human Brain Project and gave updates on the general strategies of the project, its achievements and its perspectives. Round tables and a main talk from one of the leaders of the project, Prof. Sten Grillner from Karolinska Institute, were enriched with posters and projections on maxi-screens and with the demonstration of a real robot trained using spiking neural networks developed in the project by the Italian groups in Pavia and Politecnico di Milano. The event has raised a remarkable interest involving, together with all Italian scientists of Human Brain Project, more than 300 registered participants from a broad public including students, scientists, academics as well as institutional representatives from the government and the national italian research system. A briefing with science journalists and a press release led to broad media coverage in Italy.

Documentation on the meeting is available at:

The main talks are available on YouTube and at: 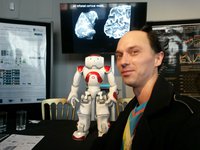 Day two was an Innovation Exhibition held at London’s Science Museum (image above left, a visitor with the Roboy robot). The day included talks from Sebastian Conran, CEO of Sebastian Conran Associates and Consequential Robotics, as well as HBP’s Tony Prescott and Karlheinz Meier. Tony Prescott said the goal was “to show people outside the HBP the work that is going on that has innovation potential and to engage with some of the people in that external community, especially people who could help translate knowledge from HBP into the more commercial world.” As well as talks the day included exhibitions from within and outside the consortium that ranged from robotics to neuromorphic computing to rehabilitative virtual reality.