In HBP,  the team of Gregoire Courtine studies basic mechanisms of electrical spinal cord stimulation in a virtual experiment setup on the Neurorobotics Platform. They also developed personalized computational models for each patient that guided the placement of the electrode arrays over the spinal cord.

31.10.18 - Three patients with chronic paraplegia were able to walk over ground thanks to precise electrical stimulation of their spinal cords via a wireless implant. In a double study published in Nature and Nature Neuroscience, Swiss scientists Grégoire Courtine (EPFL and CHUV/Unil) and Jocelyne Bloch (CHUV/Unil) show that, after a few months of training, the patients were able to control previously paralyzed leg muscles even in the absence of electrical stimulation. In HBP the team of Gregoire Courtine studies basic mechanisms of electrical spinal cord stimulation in a virtual experiment setup on the Neurorobotics Platform. They also developed personalized computational models for each patient that guided the placement of the electrode arrays over the spinal cord.

Three paraplegics who sustained cervical spinal cord injuries many years ago are now able to walk with the aid of crutches or a walker thanks to new rehabilitation protocols that combine targeted electrical stimulation of the lumbar spinal cord and weight-assisted therapy.

This latest study, called STIMO (STImulation Movement Overground), establishes a new therapeutic framework to improve recovery from spinal cord injury. All patients involved in the study recovered voluntary control of leg muscles that had been paralyzed for many years. Unlike the findings of two independent studies published recently in the United States on a similar concept, neurological function was shown to persist beyond training sessions even when the electrical stimulation was turned off. The STIMO study, led by the Ecole Polytechnique Fédérale de Lausanne (EPFL) and the Lausanne University Hospital (CHUV) in Switzerland, is published in the 1 November 2018 issues of Nature and Nature Neuroscience.

Deep understanding of the mechanisms 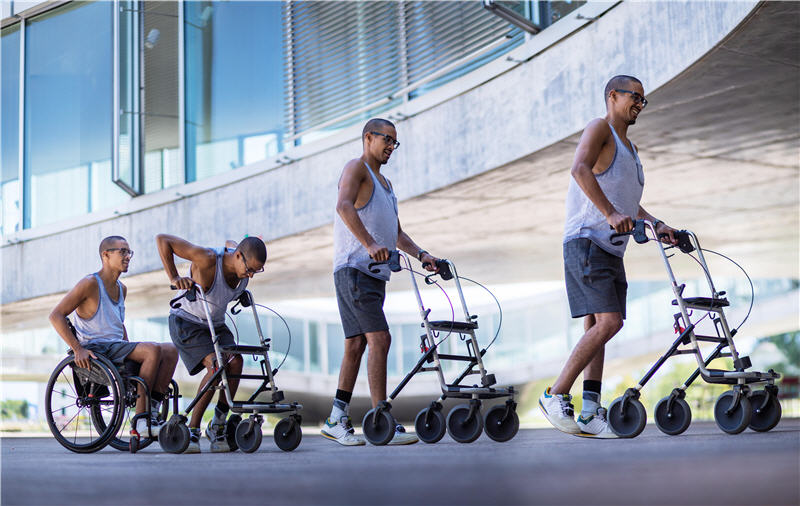 David Mzee is now able to step on his own - even without stimulation. © EPFL / Jamani Caillet

“Our findings are based on a deep understanding of the underlying mechanisms which we gained through years of research on animal models. We were thus able to mimic in real time how the brain naturally activates the spinal cord,” says EPFL neuroscientist Grégoire Courtine.

“All the patients could walk using body weight support within one week. I knew immediately that we were on the right path,” adds CHUV neurosurgeon Jocelyne Bloch, who surgically placed the implants in the patients.

“The exact timing and location of the electrical stimulation are crucial to a patient’s ability to produce an intended movement. It is also this spatiotemporal coincidence that triggers the growth of new nerve connections,” says Courtine.

As precise as a Swiss watch 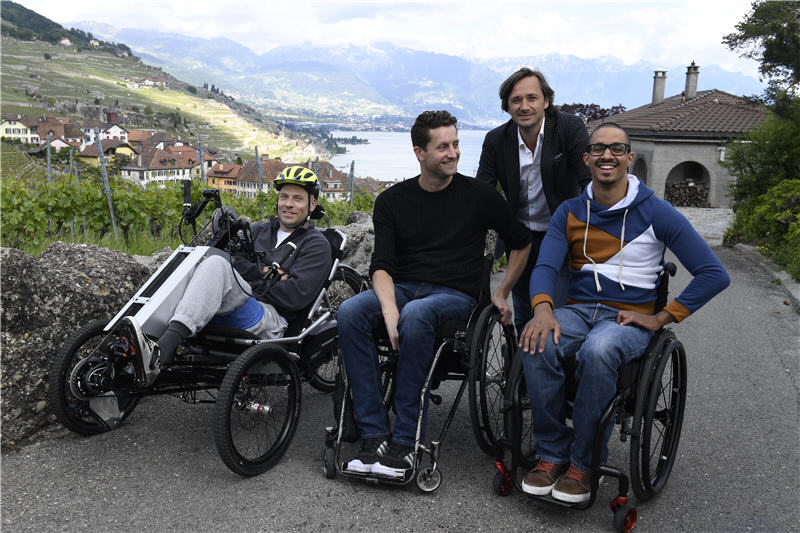 This study achieves an unprecedented level of precision in electrically stimulating spinal cords. “The targeted stimulation must be as precise as a Swiss watch. In our method, we implant an array of electrodes over the spinal cord which allows us to target individual muscle groups in the legs,” explains Bloch. “Selected configurations of electrodes are activating specific regions of the spinal cord, mimicking the signals that the brain would deliver to produce walking.”

The challenge for the patients was to learn how to coordinate their brains’ intention to walk with the targeted electrical stimulation. But that did not take long. “All three study participants were able to walk with body-weight support after only one week of calibration, and voluntary muscle control improved tremendously within five months of training”, says Courtine. “The human nervous system responded even more profoundly to the treatment than we expected.”

Helping the brain help itself

The new rehabilitation protocols based on this targeted neurotechnology lead to improved neurological function by allowing the participants to actively train natural overground walking capabilities in the lab for extensive periods of time, as opposed to passive training like exoskeleton-assisted stepping.

During rehabilitation sessions, the three participants were able to walk hands-free over more than one kilometer with the help of targeted electrical stimulation and an intelligent bodyweight-support system. Moreover, they exhibited no leg-muscle fatigue, and so there was no deterioration in stepping quality. These longer, high-intensity training sessions proved crucial for triggering activity-dependent plasticity – the nervous system’s intrinsic ability to reorganize nerve fibers – which leads to improved motor function even when the electrical stimulation is turned off.

The startup GTX medical, co-founded by Courtine and Bloch, will use these findings to develop tailored neurotechnology with the aim to turn this rehabilitation paradigm into a treatment available at hospitals and clinics everywhere. “We are building next-generation neurotechnology that will also be tested very early post-injury, when the potential for recovery is high and the neuromuscular system has not yet undergone the atrophy that follows chronic paralysis. Our goal is to develop a widely accessible treatment,” adds Courtine.