A declaration to establish an International Brain Initiative has been made by representatives from some of the world’s major brain research projects, including the Human Brain Project.

At the Australian Academy of Science in Canberra, representatives from Japan, Korea, Europe, the United States of America and Australia announced a formal declaration to work together to speed up progress on ‘cracking the brain’s code’.

The declaration reads: “Researchers working on brain initiatives from around the world recognise that they are engaged in an effort so large and complex that even with the unprecedented efforts and resources from public and private enterprise, no single initiative will be able to tackle the challenge to understand the brain.” (See below for the full declaration).

“This really is a chance to step-up to another level of interdisciplinary, international scientific research and deliver results that will profoundly impact our collective societies,” he said.

President of the Australian Academy of Science, Professor Andrew Holmes said the announcement of the International Brain Initiative was the most exciting day of his presidency to date.

“It takes real commitment, real initiative, real drive and real talent, to achieve what we have achieved with this commitment. This is how science should be done”.

Human Brain Project Scientific Director Katrin Amunts said unlocking the complexity of the brain was one of the great challenges of our time.

“To be able to share knowledge, to be able to work together, to ask and answer questions collectively is extremely exciting and promising. To understand the complexity of the brain requires the greatest cooperation possible,” she said.

President-elect of the European Brain Council Professor Monica di Luca welcomed the International Brain Initiative as the next step in deepening our ability to understand the brain.

“It is extremely timely and relevant to achieve a better coordination of the various brain initiatives worldwide not only to raise awareness of scientific results but also to share common goals. Europe already moved forward to align all efforts in the area of brain research at large through the EBC and is now ready to bring this collaboration to the next step.”

The initial members of the International Brain Initiative are:

Brain research initiatives from other countries and regions are also invited to join the International Brain Initiative.

The first meeting of the International Brain Initiative steering committee will be held in January 2018.

The ‘Canberra Declaration’ to create an International Brain Initiative can be read below or online at: https://www.brainalliance.org.au/learn/media-releases/worlds-brain-initiatives-move-forward-together/

Declaration of Intent to Create an International Brain Initiative (IBI)

It takes the World to understand the Brain

On the Occasion of the Brains at the Dome Workshop hosted by the Australian Academy of Science in Canberra, the representatives of the current and emerging Brain Research Initiatives from:

make the following Declaration of Intent:

The global Brain initiatives recognize that they are engaged in an effort so large and complex that even with the unprecedented efforts and resources from public and private resources, no single initiative will be able to tackle the challenge to measure, map, image, model, simulate, understand, imitate, diagnose and heal the brain.

The initiatives recognize that they can only significantly impact society if the efforts are embedded and in cooperation with their stakeholders: government, academia, industry, and the citizens, specifically also patients and entrepreneurs. The initiatives also understand their mission to engage and benefit the developing world.

The initiatives also recognize that the challenges of data volume, data sharing, and data science is common to all of them, and indeed the wider community, including other fields of science and industry.

The initiatives recognise that (neuro-) ethics is a key concern as citizens, policy-makers, and various communities are increasingly confronted with very significant advances in capabilities in gathering brain data, in neuro-technology, and in artificial intelligence.

To achieve these initial goals, the initiatives move forward on a previously agreed roadmap to engage more stakeholders and to set up the necessary framework to facilitate their collaboration. Initiatives from other countries and regions are invited to join.

This Declaration of Intent is non-binding and not a legal instrument. It specifically does not engage national or international authorities or institutional legal entities. A formalisation of the collaboration is envisaged after further consultations. 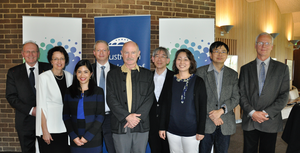