Human Brain Project scientist Viktor Jirsa is the head of a team creating personalised brain models for patients with intractable epilepsy. He explains the process and how the HBP’s brain models and cross-displinary collaborations are central to a new way of targeting epilepsy surgery.

On Viktor Jirsa’s laptop video screen, a patient sits on an unmade hospital bed, her back to the camera, her head wrapped in white bandages. Beneath the bandages 10 small holes have been drilled into the skull, through which 10 cm long rods have been carefully inserted into the folds of her temporal and prefrontal lobes.

These devices will measure the activity in her brain during an epileptic seizure. As invasive as this sounds, still more invasive surgery awaits, to open the skull and remove part of the brain responsible for the epilepsy.

But the success rate of this kind of surgery averages only about 50-60% and has not progressed in 30 years. Which is what Jirsa and his team are working to improve.

They believe they are on track. They are doing complex, multi-faceted work that uses brain models developed within the Human Brain Project to create personalised medicine that gives surgeons the most accurate information available. An early, small, clinical trial has produced promising results and a larger trial is coming.

“To me, this is a purpose of the Human Brain Project, to replace in-vivo by in-silico, to make it as non-invasive as possible so that at some point we may be able to completely stop this process of cutting people’s brains open,” Jirsa says.

Epilepsy affects about 1% of the population. For nearly one in three sufferers, like the one on Jirsa’s computer screen, their epilepsy does not respond to drugs and the only treatment option is brain surgery.

“People always get a shiver when they think about the surgery but for 30% of all sufferers the epilepsy is intractable and they do not respond to drug treatment. They are people who want a normal life, it is extremely stressful for them not knowing when the next seizure will happen, it is socially isolating and there are many comorbidities.”

Jirsa is a deputy leader in the HBP’s theoretical neuroscience team. He is based at the University of Aix-Marseille in France, where he is Director of the Institute de Neurosciences des Systèmes. He studied both theoretical physics and philosophy and is following a lifelong desire to understand the brain.

To improve epilepsy surgery, surgeons need high quality information about which area of the brain to cut, before they open the skull. This means locating the epileptogenic zone and finding the region of the discharging lesion that characterises epilepsy.

“Somewhere in the brain is an event that is of an oscillatory and very fast discharging nature that spontaneously emerges at one location and propagates to other areas, recruits these others areas, and then it stops. It can last one second to many seconds (30-40 secs), typically accompanied by symptoms that depend on the area of the brain affected.”

Building a personalised model of the brain

To locate this region Jirsa’s team start with an MRI or CT scan of the patient. This provides a picture of the individual brain. Next are the electrode implants (through holes that are drilled by a surgeon, or increasingly by surgery robots that navigate using 3D MRI scans).  The patient wears the electrodes, known as a Stereotactic EEG, for several days, as multiple seizures are recorded.

Patients are also filmed so that their behaviour during seizures can be correlated with the readings from the brain implants. Jirsa says some experienced physicians have successfully determined the epileptogenic zone solely by observing behaviour during a seizure.

In the case of the patient in Jirsa’s laptop video, as the seizure begins, she first becomes agitated, then rocks back and forth, taps her hands and legs, sways, and finally starts to sing a nonsense song. As Jirsa says, these are symptoms that would, in mediaeval times, have left her branded as a witch or as possessed by evil spirits. Today, these symptoms are carefully mapped to the readings from the electrode implants, one more part of a complex effort to relieve her of the effects of epilepsy. (It should be noted that the stigmatisation of people with epilepsy carried on well until the 20th century, as recently as 1914 it was illegal in 13 US states for someone with epilepsy to get married).

Knowing the temperature, is of course, extremely useful. Just as it is useful to reduce the complexity of the brain to fewer variables.

“In neuroscience we call this the mean firing rate of the brain. While it is absolutely true that the chemical bonds and the catalysts are important, it is the rate of firing, not the quantum mechanics of the brain that generally matters for information processing. We model the rates of firing. We go from the microscopic (spiking neurons) to the mesoscopic (populations of spiking neurons), and replace them using mean field models.”

Then, using the brain atlases developed by the HBP teams exploring and mapping the human and mouse brains, it is possible to build network models of the neuron populations with anywhere from 84 to 16,000 nodes.

“In each network node we put one of the mean field models. 8,000 nodes per hemisphere is the most definite and gives a partial resolution of 2-3mm. This is not bad. A single neuron has a connection distance, inside the grey matter, of a few mm. So we are approaching the level of highest resolution, because if you get any more detailed the concept of a mean field stops being meaningful.”

These population models trace out the folded surface of the brain in three dimensions and are made to mimic the patient’s own brain – a personalised model.

“We can virtually stick in the electrodes and each is now measuring the activity in its neighbourhood. This gives you the link between the patient’s brain and the model. MRI gives you the topography of the folds, while a DTI (Diffusion Weighted Imaging) gives you the topology via its connectivity.”

The brain model is personalised further by incorporating any malfunctions or abnormalities identified by the surgeon.

“The final piece of individualising is locating the zone of the epilepsy,” says Jirsa. This comes from the data captured by the electrode implants, with machine learning techniques employed to estimate the epileptogenic zone.

“From all of this you can identify patterns. It is like a listening to chorus. If you listen carefully you can still recognise individual voices, but only as a whole does the musical piece unravel its nature.”

From here they can test the hypothesis of which area or connection of the brain is the best to cut and run this in the model to confirm, reject or refine. A first small trial of 15 patients showed a significant improvement and a larger trial is on the cards.

Jirsa says there is also the future promise of novel, less invasive, technologies such as laser surgery, which can be performed through the same holes drilled for the electrodes. A collaboration with Cleveland Clinic, in the United States, has given a proof of concept that it may be possible to use the laser to make a few small distributed lesions to stop the seizure from propagating (the harm from epilepsy is largely caused by the spread of seizures to healthy brain areas).

In closure, Jirsa insists that “to achieve real clinical translation in computational medicine, the collaboration of scientific, clinical and industrial partners is obligatory, otherwise the efforts die out half way and novel technology never reaches the patient’s bedside. HBP is a good example, and enables this collaboration.”

Some of the science 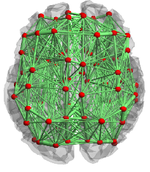 Virtualisation of a personalised brain model. a) Non-invasive imaging (MRI, CT) provides personalised images of a human subject's brain. From these images, Jirsa's team reconstructs subcortical and cortical surfaces (top left and middle) and connectivity (top right). These elements are aligned and coregistered in the same coordinate system. A parcellation of the surfaces breaks the brain down into network nodes, which are then connected by the personalised connectome. b) Network nodes and connectivity are organised in 3D physical space, providing a three-dimensional avatar. Once each network node is equipped with a mathematical representation of a neuronal population model, the brain model is functional and computer simulations generate brain model activity and its associated neuroimaging signals (see The Virtual Brain http://www.thevirtualbrain.org).

Virtual Epileptic Patient. a) The Epileptogenic Zone (EZ) is traced out in a patient's brain model, where heat map shows the spatial distribution of epileptogenicity (from low (cold colors) to high (hot colors) epileptogenicity). The heat map is either based on the clinician's hypothesis or derived from the application of machine learning methods to the model and empirical SEEG data. b) The patient's brain model generates spontaneous seizure activity mimicking the various seizure propagation patterns and its dynamic repertoire of symptomatic and asymptomatic seizures.