Scientists are continuously improving methods to read out brain activity and adjust or control it with brain stimulation techniques. Researchers at the Netherlands Institute for Neuroscience believe that these advances will lead to many new possibilities to restore brain functions that got lost or impaired as a result of an accident or disease. They explain their position in the renowned journal Trends in Cognitive Sciences. In the more distant future, similar technologies might also be applied to the healthy brain. According to the researchers, it is important to start considering all the consequences of such developments for our society.  One of the authors is HBP-scientist Prof. Pieter Roelfsema, who will be a speaker at the public HBP Open Day on October 15th in Maastricht, and give the talk "Visual cortical prosthesis for the blind".

Technology has already reached a stage in which electrodes on electronic chips that are implanted into the brain can read the ongoing activity of specific brain areas. This technique allows, for instance, that patients with paralysis control a robotic arm or computer cursor directly with their ‘thoughts’. The reverse is also possible: with similar electronic chips, information can be directly transmitted to either the peripheral nerves or the brain. Cochlear prosthesis, for instance, use this principle to let people with impaired hearing hear again, while stimulation of deep brain areas can relieve symptoms of Parkinson’s disease.

The neurotechnological applications that exist today primarily act on relatively simple brain mechanisms and the precision with which they read and write information from and to the brain is limited. However, as our knowledge of more complex brain mechanism increases and techniques to read from and write to the brain become more sophisticated, the possibilities for more advanced neurotechnology will rapidly increase as well. Progress will likely first improve the efficiency of therapeutic neuroprostheses, but sooner or later, technologies will also be considered that aim to enhance the capacities of the healthy brain. Along these lines, neuroprostheses that create direct connections between the brain and the internet, or that facilitate entirely new forms of communication based directly on brain activity are not inconceivable. In their publication, the researchers discuss both the great potential of novel neurotechnologies and their possible implications for important issues like mental privacy and human identity.

Text adapted with permission from
https://nin.nl/reading-and-writing-the-mind-with-brain-implants/

Read also: Interview with Pieter Roelfsema: ‘MY DREAM? A PROSTHESIS THAT LETS THE BLIND SEE AGAIN’ 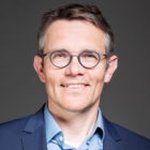 Prof. Pieter Roelfsema is the director of the Netherlands Institute for Neuroscience, where he leads the Vision and Cognition group. Research of this group is directed at understanding cortical mechanisms of visual perception, memory and plasticity. One of the central goals is to create a visual cortical prosthesis to restore vision in blind people. In HBP Pieter Roelfsema he contributing to the research area “Human Brain Organization” and the multimodal HBP Brain Atlas, as well as “Co-Design Project 4 - Visuo-Motor Integration”, which aims to develop and implement neurobiologically realistic models of sensorimotor integration.

At the Human Brain Project Open Day in Maastricht on 15 October 2018, Pieter Roelfsema will present the talk “Visual cortical prosthetic for the blind”. The talk is part of the session “Closed loops: From brains to machines and back”.

Join us for the HBP Open Day in Maastricht on October 15!

The HBP Open Day presents latest developments on how modern computing technologies enhance our understanding of the human brain, how this knowledge can be applied to develop new diagnostic and therapeutic tools for brain disorders, and inspire new technologies. At a dedicated HBP Science Market, visitors can learn about HBP from different virtual and physical exhibits, such as exploring the brain in virtual and augmented reality or interacting with smart robots. It is free to attend and open to the public. Registrations are open now - find more information at: https://www.hbpopendaysummit-2018.org/openday/programme