Funded by the Human Brain Project (HBP), the Individual Brain Charting project acquires a set of high-resolution functional MRI maps of the brain during a wide range of behavioral tasks. The data will be used to develop a macroscopic functional atlas and contributes to the HBP´s research area “Human Brain Organization”. The first version of the IBC project dataset has now been released in the open access journal Scientific Data.

Despite an abundant literature on the neurocognitive mechanisms underlying specific tasks, little is known about the links between cognition and the overall functional organization of the brain. Neuroimaging techniques like functional magnetic resonance imaging (fMRI) have been used by labs all over the world to characterize the relationships between regional brain activity and cognition in thousands of individual studies. However, to date, no study has systematically addressed functional mapping at a fine spatial scale of cognitive processes over a wide range of tasks.

The objective of the Individual Brain Charting project (IBC) within the HBP is to establish a high-resolution (1.5 mm) multi-task fMRI data set, which will be used to develop a complete functional atlas of the human brain. The data were acquired at NeuroSpin Paris, which is part of the HBP partner institution CEA, under the responsibility of Lucie Hertz-Pannier, principal investigator of the project and under the scientific responsibility of Bertrand Thirion. A cohort of twelve participants performed several cognitive tasks: low-level tasks, such as looking at an image or typing three times with a finger; high-level tasks like mental calculation, reading sentences or interpreting a story involving someone's beliefs. Obtaining a wide range of fMRI data from the same subjects and at the same site helps to minimize the problem of inter-subject and inter-site variability.

In their recently published article, the researchers present the first version of the IBC data set, which includes a dozen tasks. The raw data are public and available on the OpenNeuro website (ds000244) and the post-processed data on NeuroVault (id2138). Also included are estimates of data quality and a statistical assessment of cognitive networks. Future developments will include data for new tasks and the development of a neurocognitive atlas derived from the data set. The datasets are also being integrated into the HBP Knowledge Graph where they will be available shortly.

Geometric models of the brains of the 12 participants in the IBC cohort. 10 acquisitions (8 with fMRI and 2 with anatomical and diffusion MRI) were performed in 12 volunteers. Shown above are models obtained from anatomical MRI images, that show the differences in brain shape. These differences are normal and found throughout the population. https://project.inria.fr/IBC/ 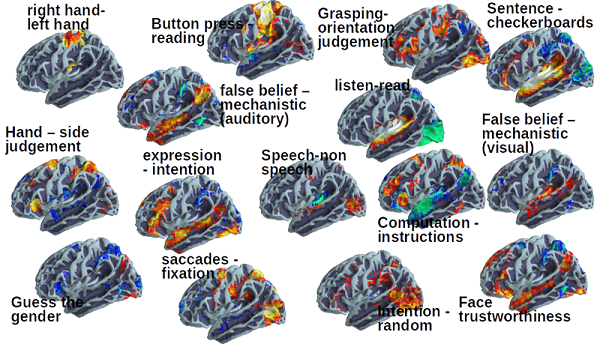 The IBC project collects high quality, high resolution functional and structural information to characterize brain structure and produces maps with unmatched accuracy. IBC passes a large number of functional paradigms to the 12 subjects and the images obtained make it possible to specify which regions of the brain are activated during a given task. © C.Poupon/P.Pinel

The data is freely accessible for scientists worldwide. Pictured: Neurovault