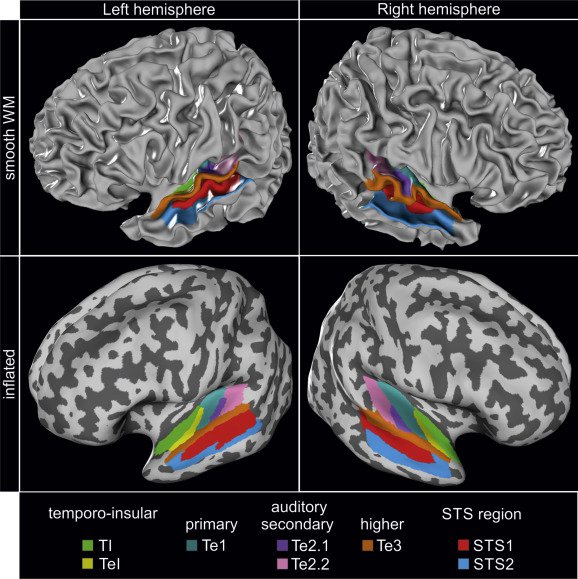 The architectonical organization of putatively higher auditory areas in the human superior temporal gyrus and sulcus is not yet well understood. To provide a coherent map of this part of the brain, which is involved in language and other functions, we examined the cytoarchitecture and cortical parcellation of this region in histological sections of ten human postmortem brains using an observer-independent mapping approach. Two new areas were identified in the temporo-insular region (areas TeI, TI). TeI is medially adjacent to the primary auditory cortex (area Te1). TI is located between TeI and the insular cortex. Laterally adjacent to previously mapped areas Te2 and Te3, two new areas (STS1, STS2) were identified in the superior temporal sulcus. All four areas were mapped over their whole extent in serial, cell-body stained sections, and their cytoarchitecture was analyzed using quantitative image analysis and multivariate statistics. Interestingly, area TeI, which is located between area Te1 and area TI at the transition to the insula, was more similar in cytoarchitecture to lateral area Te2.1 than to the directly adjacent areas TI and Te1. Such structural similarity of areas medially and laterally to Te1 would be in line with the core–belt–parabelt concept in macaques. The cytoarchitectonic probabilistic maps of all areas show the localization of the areas and their interindividual variability. The new maps are publicly available and provide a basis to further explore structural–functional relationship of the language network in the temporal cortex.