European science and innovation policy are in transition. As Horizon 2020 draws to a close, the European institutions are putting the final touches to the next budgeting cycle and the new-look program Horizon Europe. 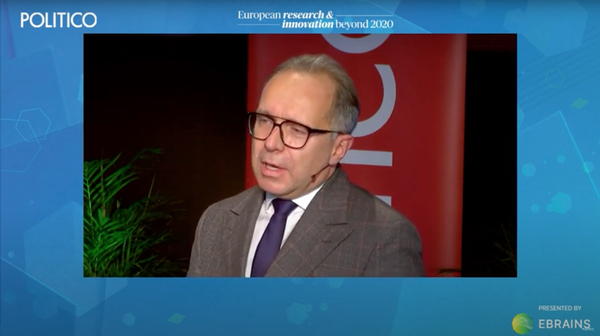 Laura Greenhalgh, News Editor at Politico Europe, led a lively panel discussion on the new Horizon Europe program, the impact of COVID-19 on research and innovation, and Europe’s research relationships with its competitors and collaborators including the U.K., China, and the U.S.A.

Watch the webinar below:

Live reaction to the event from POLITICO and EBRAINS

The winning formula of European Research

In his welcome remarks, Paweł Świeboda emphasized the need for a multidisciplinary approach to the growing complexity of scientific research in Europe.

Horizon Europe is in peril if budget block persists

Horizon Europe, the EU’s research program, might not start in January 2021 as planned if EU countries fail to agree on the bloc’s long-term budget, Jean-Eric Paquet, the European Commission’s director general for Research and Innovation said during the webinar.

“If there is no budget, there is no program, and the program cannot start without an agreement on the [multi-annual financial framework], and from the MFF then on the yearly budget 2021,” Paquet said.

“It is indeed absolutely essential that member states come together and realize that putting a veto on the MFF [means] blocking very many programs with high EU added value for each member state, but then also for the Union together,” he noted. “Research, I think, is a good example of that.”

Republished with permission of POLITICO Europe.

The European Union will remain an appealing environment for international research collaborations even after Brexit, Jean-Eric Paquet, the European Commission’s director general for Research and Innovation said during the webinar.

“We are absolutely attractive with 27 member states and associated countries. I think there should be absolutely no doubt, this is absolutely obvious,” Paquet said, while noting that, in any case, Britain would probably still be part of the EU’s research program Horizon Europe after leaving the EU.

“If we have this overall agreement with the United Kingdom, then I would very much expect that association to Horizon Europe is a component of it, and that would of course be a positive outcome,” he said.

“There should be no Brexit research and innovation-wise,” he said at the same event.

“I cannot think, for one second that — either from the British side, or from the EU side — the notion that Oxford and Cambridge would float somewhere on the middle of the Atlantic makes any sense,” Lamy added.

Republished with permission of POLITICO Europe.