EBRAINS, the new digital research infrastructure set up by the EU-funded Human Brain Project, has made available an enhanced brain simulation software, NEST 3, with wide practical use in fields such as neuroscience and robotics. NEST 3 enables a better representation of entire populations of neurons and offers an optimised simulator performance. 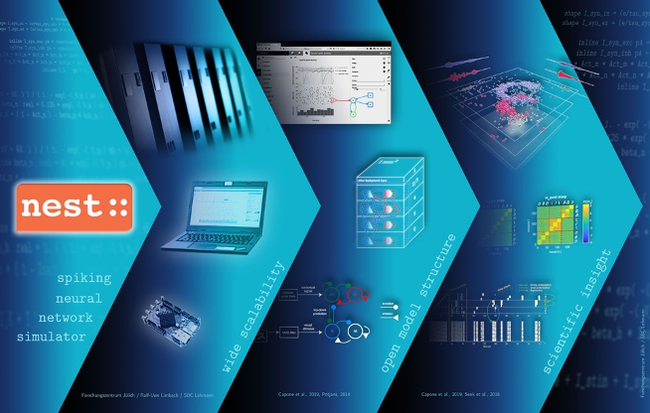 NEST (short for Neural Simulation Tool) is a highly scalable software for neuroscientists to investigate the dynamics of very large networks of neurons. It is one of the main simulation engines used in the Human Brain Project.

Adaptable and user-friendly, NEST 3 serves different users, from student researchers with laptops to established scientists with access to supercomputers. Dedicated developer efforts during the Human Brain Project have prepared NEST 3 for the new era of ultrafast exascale supercomputers. 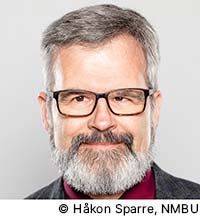 "NEST is the leading tool for neuronal network simulation focusing on network dynamics and a reference tool in its field. The combination of the NEST 3 simulator, NESTML modeling language and the NEST Desktop user interface provide a powerful combination of tools for cutting edge neuroscience and education."
-Hans Ekkehard Plesser, President of the NEST Initiative and
Leader of the EBRAINS High-Level Support Team

NEST 3 boosts the productivity of brain scientists by making it much easier to construct complex network models in the computer. Using NEST 3 a single line of code can achieve what required dozens of lines of code in earlier versions. This allows researchers to explore a wide range of model variants and makes it easier to validate models, contributing reliable and reproducible research. Performance improvements enable ever larger simulations including the efficient storage of steadily growing amounts of simulation data.

Future brain researchers will grasp the nature of brain models faster using NEST Desktop, the powerful graphical interface to brain simulations with NEST. Originally conceived and trialled as a teaching tool at the University of Freiburg, NEST Desktop has matured to production use through a Human Brain Project partnering project and is now available as an online tool on EBRAINS.

The NESTML modeling language allows scientists to easily extend NEST with new models of nerve cells and connections between them. They can thus benefit the well-established reliability of the NEST simulator while exploring new ideas and concepts in brain science. This not only improves the quality of research but also eases the sharing of new brain models with other scientists.

Released together with NEST 3, NEST Server provides a flexible but secure interface to the NEST simulator kernel, allowing NEST to provide simulation services to NEST Desktop and the EBRAINS Neurorobotics Platform as well as enabling large-scale NEST simulations on HPC systems from the EBRAINS Collaboratory.

NEST is a command line tool for simulating neural networks. It allows users to build networks of model neurons inside a computer and simulate it. By modifying neurons and the connections between them, scientists can explore how the properties of the network elements influence its activity.

NEST focuses on the dynamics, size and structure of neural systems, rather than on the exact morphology of individual neurons. This allows modelling extremely large systems to observe how complex networks behave under different conditions, while retaining cellular resolution. It is ideal for networks of any size and is openly available to download. Find out more here: https://ebrains.eu/service/nest-simulator.

NEST has been used to create some of the largest anatomically constrained brain models in neuroscience today, including:

In 2014, PhD student Tobias Potjans and his supervisor Markus Diesmann published a model of a minimal building block of cortex, a microcircuit model, based on careful analysis of anatomical data. By sharing their model as a NEST implementation, they encouraged researchers to build directly on their work resulting in numerous scientific publications. This microcircuit model comprising approximately 77,000 neurons is freely available for anyone to explore through EBRAINS.

The power of NEST to simulate significant parts of a brain is demonstrated by a 2018 model of the entire visual cortex of the macaque monkey. Including 32 brain areas with a total of over 4 million neurons, the multi-area model by Maximilian Schmidt, Sacha van Albada and colleagues represents the state of the art in anatomically grounded brain models. Both the model itself and the complex workflows required to analyze its dynamics have been carefully reviewed and documented and are freely available as references and the starting point of future research.

Work within the Human Brain Project has further expanded the user groups of NEST:

On EBRAINS, researchers can connect NEST to a macroscopic whole brain simulation engine, “The Virtual Brain”, which is used in medical research to model brain diseases. The resulting multiscale simulations provide a path to investigate how phenomena on the microscale and macroscale of the brain are linked.

NEST brain models are well suited to link neuroscience to technology research. On the EBRAINS research infrastructure, scientists can use the Neurorobotics Platform to connect NEST to virtual robots to test how brain models can respond to sensory input to control robot actions.

Nearly 50 developers from four continents contributed to the release of NEST 3. Its development started in 2016, with teams from the Norwegian University of Life Sciences, Ås, and the  Research Centre Jülich, Germany as major contributors.  NEST development is representative of the collaborative approach that EBRAINS fosters. 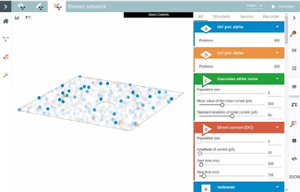 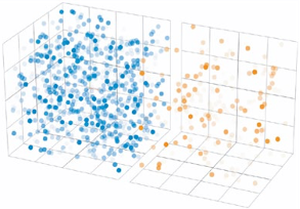 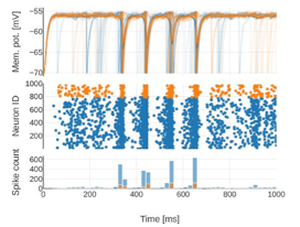 EBRAINS is a new digital research infrastructure, created by the EU-funded Human Brain Project, that gathers an extensive range of data and tools for brain related research.

EBRAINS aims to help translate the latest scientific discoveries into innovation in medicine and industry, for the benefit of patients and society. It draws on cutting-edge neuroscience. Apart from simulation tools such as NEST, EBRAINS also offers an extensive range of brain data sets, a multilevel brain atlas, modelling tools, and easy access to high-performance computing resources as well as to robotics and neuromorphic platforms.