Although it is generally assumed that the brain operates as an adaptable processor, its intrinsic mechanisms of computation and learning remain largely unknown. In a recent publication in «Nature Communications Biology», the team at the Neurophysiology Laboratory of the University of Pavia directed by Prof. Egidio D’Angelo has revealed how the microcircuit of the cerebellum transforms internal signals implementing de facto computational algorithms that can be modified through learning. 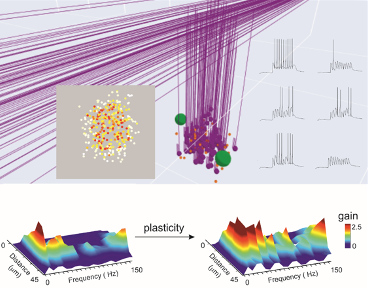 A computational model of the cerebellar granular layer made of over 100000 neurons hosting different cells types predicts the formation of adaptive transmission channels.

The granular layer of the cerebellum has long been thought to perform spatial pattern separation and adaptive filtering, but this theoretical prediction has remained untested so far. Our computational models, based on a realistic reconstruction of the cerebellar network, have predicted that long-term synaptic plasticity would reconfigure the granular layer functioning, changing the gain and bandwidth of its transmission channels. This prediction was validated by using advanced recordings with a multispot 2-photon confocal microscope and voltage-sensitive dye imaging.

The discovery of adaptable transmission channels supports the long-sought spatiotemporal reconfiguration of the inputs that the cerebellum receives through its numerous sources. This turns into a multidimensional remapping of brain activity that allows the brain to learn from errors implementing sensorimotor and cognitive controllers, and to operate in a predictive manner.

Through a network of collaborations inside the Human Brain Project, the new microcircuit properties reported here are going to be implemented into large scale models and inserted into close-loop controllers, neurorobots, neuromorphic computers, and virtual brains, applicable to neuroengineering, artificial intelligence, and neurology.