​In this study, NeuroSpin researchers leveraged the Individual Brain Charting (IBC) dataset, acquired by high-resolution functional MRI during the performance of behavioural tasks, to investigate the feasibility of individual mapping of the cognitive components underlying the tasks. They thus individualized six regions of interest in the language network and established their cognitive profile. 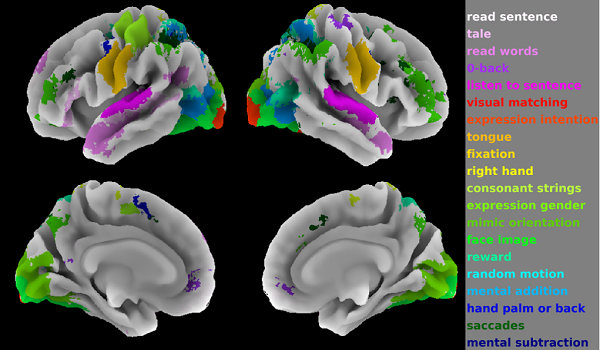 ​Representation of the cerebral regions activated during the execution of different tasks. B. Thirion © CEA/INRIA

Functional Magnetic Resonance Imaging (fMRI) has opened the possibility to investigate how brain activity is modulated by behavior. Most studies so far are bound to one single task, in which functional responses to a handful of contrasts are analyzed and reported as a group average brain map. Contrariwise, recent data-collection efforts have started to target a systematic spatial representation of multiple mental functions.

In this paper, researchers leveraged the Individual Brain Charting (IBC)* dataset, a high-resolution task-fMRI dataset acquired in a fixed environment, in order to study the feasibility of individual mapping. They first verified that the IBC brain maps reproduce those obtained from previous, largescale datasets using the same tasks. They secondly confirmed that the elementary spatial components, inferred across all tasks, are consistently mapped within and, to a lesser extent, across participants. In a third time, they demonstrated the relevance of the topographic information of the individual contrast maps, showing that contrasts from one task can be predicted by contrasts from other tasks. At last, they showcased the benefit of contrast accumulation for the fine functional characterization of brain regions within a pre-specified network. To this end, they analyzed the cognitive profile of functional territories pertaining to the language network and proved that these profiles generalize across participants.

These results show that the use of rich task data sets is necessary in studies of cognitive mapping and individual modeling of the human brain.