The Human Brain Project is adding new capacities and enhanced functionality to its Medical Informatics Platform.

Three Open Calls were launched on January 29, worth a total of EUR 3million.

“The Open Calls are important to allow additional expertise and new blood to come into the HBP, as well as allowing us to extend the network and have a greater impact,” says Dr Philippe Ryvlin, leader of the Medical Informatics Platform (MIP).

Ryvlin says two of the three Open Calls are to develop what are known as clinical Use Cases and the third aims to expand the capacity of the MIP to house data for all, or nearly all, brain diseases.

“The MIP has a very clear objective to serve ambitious research projects in the field of clinical neuroscience; to better understand brain disease, to develop novel biomarkers of brain disease that could be useful for clinical practice and, in the future, have a direct impact on patient management. And this is done through what we call clinical use case. We focus on a specific disease or condition and we test the value of the MIP.”

“We do not know which disease will be proposed. It can be virtually any brain disease at this stage but what is very specific is that we really want the applicants to not just do data mining on a big volume of patient data, but rather to build a sophisticated and original predictive model, incorporating as much information as can be delivered today by the different fields of neuroscience including those already active in the HBP.”

Specifically, the call aims to combine the fields of system biology and system neuroscience, theoretical neuroscience, neuroinformatics, and computational neuroscience. Once the predictive model is built, it will be tested against the large volume of real medical data held in the MIP.

“Here we really take advantage of the major effort developed in the other areas of the HBP to bring together all the knowledge that needs to converge to make real progress and real innovation.”

The aim of this call is to bring unique data to the MIP that not only helps to understand the diseases but also to learn about brain behaviour under direct stimulation.

“It is really a unique situation where we learn as much about the disease as about the brain network and brain function using technologies that resemble those used in experimental neuroscience in animals. It will allow us to bridge the gap between basic neuroscience done in animals and knowledge we gather in humans, and that really makes it very special,” says Dr Ryvlin.

It will also generate better understanding of important questions such as the relationship between the precise location of the electrodes used for DBS and the clinical outcome of the patient, as well as add data about neurophysiological signals to the MIP.

The third call is not a use case, but concerns ontologies - how you structure information. In the case of the MIP this means medical terminology, signs, symptoms, biological signals, diagnosis etc. It's title is Comprehensive ontologies for brain diseases.

“Of course there are already ontologies in the MIP for the clinical use cases that have been developed on dementia and Alzheimer’s disease, but we would like the MIP of tomorrow to be ready for any brain disease by having already integrated their specific ontologies” says Dr Ryvlin.

“These calls open the doors to a very exciting development. The scientific community will have the expertise to respond and I assume they will be very interested by this opportunity.” 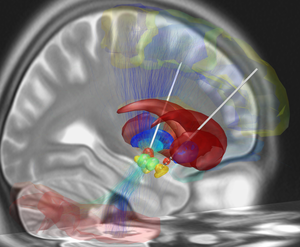