Interest in research into the effects of psilocybin, a psychedelic drug, has increased significantly in recent years due to its promising therapeutic effects in neuropsychiatric disorders such as depression, anxiety and addiction. 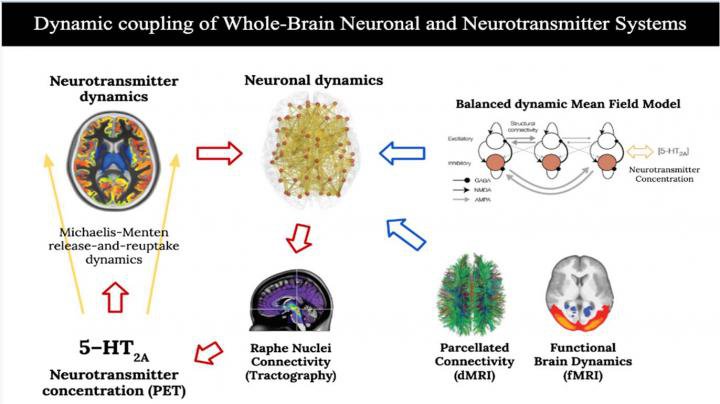 It is widely accepted that the brain's powerful ability to adapt its behaviour flexibly is largely due to the neurotransmitter system. Psilocybin is the substance responsible for the psychoactive effect caused by nearly 200 species of fungi. This substance has a particular affinity for serotonin receptors found primarily in the brain, but also in other parts of the body such as the stomach. Upon consumption, psilocybin selectively changes the function of serotonin receptors, thus generating an altered state of consciousness characterized by the dissolution of the ego, changes in the quality and attribution of thoughts, impaired visual and sensory perception, and greater awareness of repressed memories.

An international team of researchers has developed a computational biophysical model of the entire brain that integrates real data about its anatomical structural connectivity, the functional dynamics of neurons and a map which shows the concentration of serotonin receptors in various brain regions.

This international research, published on 13 April in the journal Proceedings of the National Academy of Sciences, was led by Gustavo Deco, ICREA research professor and director of the Center for Brain and Cognition at the Department of Information and Communication Technologies (DTIC) at UPF, with the participation of Josephine Cruzat, a member of his team, Morten L. Kringelbach, a neuroscientist at the University of Oxford (UK), and other scientists from research centres in Germany, Denmark, the US, Portugal and the UK.

This work has shown that the new dynamic model of the whole brain is capable of addressing one of the major challenges in neuroscience: to explain the paradoxical flexibility of brain function despite having a fixed anatomical structure

Study of psilocybin's mechanisms of action in humans

This theoretical and experimental study modelled the interaction between neuronal and neurotransmitter systems throughout the brain to explain how psilocybin affects brain activity. To study the drug's mechanisms of action, Morten Kringelbach, Josephine Cruzat and Gustavo Deco analysed data from functional magnetic resonance imaging (fMRI) in 16 healthy subjects. In the experiment, participants were given small doses of psilocybin intravenously or saline solution (placebo effect) while in the scanner, to measure their brain function. The experimental part of the study was carried out at Imperial College London under the direction of Robin Carthart-Harris, co-author of the study.

The functional data acquired under the conditions of placebo and psilocybin were then combined with data from diffusion magnetic resonance imaging (dMRI) capturing brain structure by describing the anatomical connections between the different brain regions; and with data on the density of serotonin receptors estimated by positron emission tomography (PET).

As explained by Deco and Cruzat, co-authors of the work and experts in computational neuroscience, "the computational simulations performed in this study revealed that the integration of neuronal and neurotransmitter systems at the whole-brain level is important to fully explain the effects of psilocybin on brain activity, specifically through the stimulation of serotonin receptors 5 -HT2A, involved in psychoactive modulation".

Overall, the remarkable flexibility of human brain function depends crucially on the bidirectional dynamic participation of neuronal and neurotransmission systems. According to the authors, this new approach provides a better and deeper understanding of the effects of psilocybin on the brain and may lead to the development of new treatments for neuropsychiatric diseases such as depression, anxiety and addiction.