US computing pioneer Robert ‘Bo’ Ewald will be speaking at the HBP Open Day. His company D-Wave has brought the first quantum computers to market. He took some time out to answer a few questions ahead of the Summit.

Mr. Ewald, you are speaking about quantum computing at the Human Brain Project's Summit (October 17 in Glasgow). As a US-Computing expert, how did it come about that you are at this event?

I’ve known some of the people and organisations who lead and work with the Human Brain Project for several years, Dr. Katrin Amunts in particular. And, good and interesting ideas know no boundaries whether they be oceans or political boundaries, so people all over the world are interested in the Human Brain Project. And, while I’ve been involved in high performance computing and graphical interfaces to computers for many years, it is clear that we and our computers are still in the early days of being able to model all that happens in our heads. So, we are investigating whether emerging quantum computers might be of help to the project.

Your company D-Wave sells the first ever commercially available quantum computer. Could you explain for someone not so familiar with quantum theory how this type of computing works, as opposed to a digital computer using 0s and 1s?

Our computers use quantum effects of superposition, entanglement and quantum tunneling to find a solution to a problem that is mapped onto the system’s quantum bits (qubits). If you think of a mountainous landscape the D-Wave System uses those quantum effects to find the low valleys without adding numbers, or multiplying, etc. What it really is doing is finding a low energy solution to the problem that you specified 5,000 – 10,000 times a second, but you can think of it as finding a low valley in an energy landscape. In doing that it considers a large number of possible solutions before settling on the one that it “recommends”.

What are the kinds of problems quantum computers will do better?

Following the idea that the system is finding these low valleys, the D-Wave System can be used to find the best solutions to optimisation problems like traffic flow optimisation (i. e. how to optimally route traffic to minimise congestion), or logistics applications, or optimising a manufacturing process.  There are some emerging applications in machine learning like facial recognition or election modelling.  And, eventually, we believe that there will be some applications of modelling quantum behavior of materials, or perhaps brains eventually.

Is traditional computing approaching a limit soon and can it be overcome by quantum computers?

Your talk will be about “The Journey from Digital to Quantum Computing”. You can really speak from experience – before entering D-Wave in 2013 you already had a decades-long career in High Performance Computing. Back then would you have imagined that Quantum Computing would ever become a reality?

I’m not one to doubt people’s creativity and dedication to advance knowledge, technology, business, etc. so I certainly imagined that such machines might be possible.

What are the main challenges in building these types of computers?

Research and development of quantum computers has been going on for about 30 years, and I don’t think anyone understood the difficulties of creating system architectures that might work, being able to scale up the number of qubits and connectivity, how important and daunting error correction would be to gate model architectures, etc. Quantum computing isn’t just a different technology that is being used to implement a classical computer architecture. It is an entirely new way of thinking about old problems, and will enable us to attack some new problems that were previously intractable.

You said your machine is particularly good at problems that can be viewed as an energy landscape. Could this be interesting for simulation and data analytics related to neuroscience?

While it is still very early in the application of quantum computers, there are some interesting potential areas of mutual interest. Our D-Wave systems have been shown to be good at some optimisation problems, at machine learning, sampling or Monte Carlo. Neuroscientists might find those useful for some of their questions. Also, the way our machines are constructed with qubits that are interconnected would remind neuroscientists of a primitive representation of neurons and synapses, where each of our qubits can communicate with and influence its nearest neighbor qubits.

Where do you hope progress in neuroscience will lead us to?

Not being a neuroscientist, perhaps my ideas are simplistic, but I could imagine three major areas of progress:

- a more fundamental understanding of how our brains actually work

- so we could better understand and counteract various diseases

- and with more insight into how our brains work, create better computer models to help us understand things that we don’t understand today.

Bo Ewald will be talking at the #HBPOpenDay17 in Glasgow on October 17. You can read more about the Open Day here. It is free and open to all members of the public. 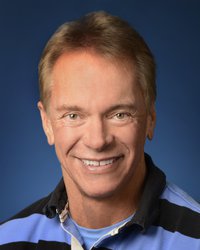 D-Wave president Robert 'Bo' Ewald, who will be giving the highlight presentation at the HBP's Open Day in Glasgow on October 17. Image courtesy Bo Ewald.