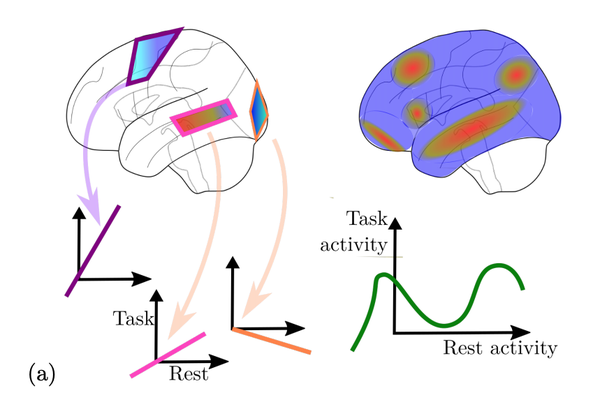 Challenges in the definition of local gradients of brain function: Do local linear models, a.k.a. gradients (a – left), capture the joint variation of task-fMRI and rest-fMRI features as well as —or better than— a brain-wide non-linear model that would relate these two types of data (a – right)?

Functional neuroimaging provides the unique opportunity to characterize brain regions based on their response to tasks or ongoing activity. As such, it holds the premise to capture brain spatial organization. Yet, the conceptual framework to describe this organization has remained elusive: on the one hand, parcellations build implicitly on a piecewise constant organization, i.e. flat regions separated by sharp boundaries; on the other hand, the recently popularized concept of functional gradient hints instead at a smooth structure. Noting that both views converge to a topographic scheme that pieces together local variations of functional features, we perform a quantitative assessment of local gradient-based models. Using as a driving case the prediction of functional Magnetic Resonance Imaging (fMRI) data —concretely, the prediction of task-fMRI from rest-fMRI maps across subjects— we develop a parcel-wise linear regression model based on a dictionary of reference topographies. Our method uses multiple random parcellations —as opposed to a single fixed parcellation— and aggregates estimates across these parcellations to predict functional features in left-out subjects. Our experiments demonstrate the existence of an optimal cardinality of the parcellation to capture local gradients of functional maps.