Published in PLoS Computational Biology, the study by Tiina Manninen, Ausra Saudargiene and Marja-Leena Linne is the first to show the complex molecular level interactions that astrocytes recruit, together with the pre- and postsynaptic neurons, to increase the diversity of synaptic plasticity in developing somatosensory cortex. This reinforces the idea that astrocytes not only provide the 'housekeeping' for the neurons, but that they actually play an integral important role in supporting and expanding the functions of neuronal networks. 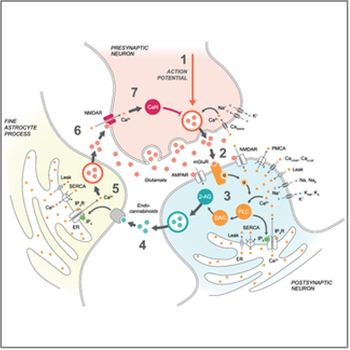 Astrocytes are star-shaped cells in our brain that belong to the group of non-neuronal cells called glial cells. The common belief is that glial cells are not like neurons – they maintain homeostasis, form myelin, and provide support and protection for neurons. Over the past ten years, this assumption has been questioned more frequently as new evidence about the multiple roles of astrocytes has emerged in vivo. In the neuron-centric view, changes in neuronal activity and synaptic plasticity depend solely on the intrinsic properties of neurons and the information transmitted. However, our study, combining a multitude of experimental data and computational modeling techniques, shows that astrocytes may play a more profound role in controlling neuronal synaptic plasticity profile than previously thought.

Astrocytes are integral elements of synapses in developing rodent and human cerebral cortices. A single cortical astrocyte is estimated to contact between 20,000 and 120,000 synapses in rodents and up to 2,000,000 synapses in humans. Astrocytes have been shown to dynamically modulate synaptic transmission and plasticity in some cortical synapses in vivo, but how this occurs in time and space has remained unclear. We show with a new somatosensory cortical synapse model that a well-established feedback signal from a postsynaptic neuron to a presynaptic neuron via a fine astrocyte process can induce and  maintain long-lasting decrease in synaptic transmission during early development. The novelty of our work is that we predict for the first time the dynamics of the molecular mechanisms underlying synaptic plasticity changes in neurons and astrocytes. Our work demonstrates how a synapse can integrate complex signaling in astrocytes to increase the diversity of synaptic plasticity and, consequently, enhance the capacity of information processing in the brain.

Our results suggest that astrocytes are in fact an integral part of synaptic computations and may guide brain circuit functions, learning and memory during development. Disruptions in these processes are likely involved in neurodevelopmental diseases such as schizophrenia and autism spectrum disorder. Our future goal is to better understand the role of cortical astrocytes in modulation of neuronal network activity and behavior in healthy and diseased brain.