Devoted to the topic of Promoting Innovative Leadership, the meeting gathered scientists from within and outside of the project to discuss ways of fostering equal career opportunities between men and women. Discussions with international experts added the dimension of more systematically integrating sex and gender analysis into research. The conference was jointly organized by UPM, the HBP’s Coordination office, the HBP Education Programme and EAF Berlin. It was preceded by a career workshop and networking event for female researchers on March 8, the International Women’s Day. 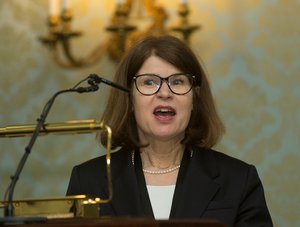 The HBP is a European Commission Future and Emerging Technologies (FET) Flagship that develops an ICT-based scientific research infrastructure for brain research, cognitive neuroscience, and brain-inspired computing. With 118 partner organizations in 19 EU member states it is one of largest scientific projects in Europe. More than 500 researchers work in the project – however, so far, only 15% of those in leading positions are women. “Gender equality in institutions, research and education is a highly relevant issue," said Katrin Amunts, scientific director of the HBP (pictured above, right). The neuroscientist welcomed the participants together with Guillermo Cisneros, Rector of UPM, and Valentina Perrotta of the European Commission. Out of the 12 major subprojects of HBP, currently only two are led by female researchers, two more have female deputies. “We knew we had to address this gap” Amunts said.

In 2016, the project set up a gender task to start working against the imbalance. Numerous activities have been conducted since, including the formation of a Gender advisory committee with members from across the project. EAF Berlin, an independent research and advisory body, was brought in to analyze the situation and design a Gender Action Plan with concrete recommendations for the future. 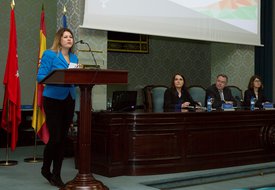 In Madrid, EAFs Katharina Schiederig (at the podium, left) presented the proposal for the plan. To provide a sound information basis, a survey was conducted among HBP members at the start. It revealed a significant underestimation when it came to the issue of gender imbalance: 41% of men and 21% of women estimated that the share of leadership positions in the project was equal. “We are proposing a strategic approach, with both top-down measures from the level of the projects governance, and bottom up activities throughout the project”, Schiederig said.

Concrete actions include establishing workshops and education plans that promote women's participation in the project, mentoring programmes that encourage women to hold leadership positions, childcare and dual career support, encouraging the promotion of women to leadership positions and raising awareness through different formats.

For the final proposal a number of suggestions were made in an open panel discussion, such as combining career and governance oriented measures with integrating sex and gender analysis into HBP’s research areas. Much inspiration for this was drawn from the keynote of Londa Schiebinger (left), John L. Hinds Professor of History of Science at Stanford University, one of the leading experts in Gender analysis, and the Director of the EU/US Gendered Innovations in Science, Health & Medicine, Engineering, and Environment Project.

As she showed with striking examples, neglecting gender and sex analysis can lead research astray. Drugs fail more often in women, and one reason is that most research is done in males. In animal research, scientists found that rats and mice react to male pheromones and don’t show pain when male researchers are present. As an uncontrolled variable, this “male observer effect” throws previous results on pain research into question. And even in technology development gender effects can lead to unexpected results, as artificial intelligence systems can “inherit” stereotypes from the databases the algorithms are trained on. As Schiebinger herself just demonstrated in a study in Nature Human Behavior, the quality of research in this dimension is linked to team diversity: An analysis of 1.5 million medical papers showed that if there were more women as first or last author on research teams, the studies were more likely to incorporate Sex and Gender analysis.

“We now have a concrete plan to improve the gender ratio”, summarized Chris Ebell, the HBP’s Executive Director in a closing statement. “It’s a call to action for us all in the project.” But the conference also gave new perspectives to go beyond pure governance and policy aspects: “As we saw at this meeting, gender equality and sex and gender analysis in research are elements that work in concert. These are important questions where HBP can contribute more in the future.”

Participants of the workshop on March 8 before the conference (Photo: UPM)

@HumanBrainProj Our own Ainhoa Echeverria leading a panel on Promoting Innovative Leadership with Londa Schiebinger from @Stanford and Ineke Klinge of @maasuniversity - at the HBP Gender conference in Madrid. pic.twitter.com/Gy8Pe3cFZB

Follow #HBPGenderMatters today! I’m leading a workshop this afternoon on “Networking Dos and Don’ts” for careers in science!! Let me know your top tips! 🙌🏼💪👩🏽‍💻👩🏼‍🏫👩🏿‍🏭👩🏾‍🔬👩🏻‍🔧 https://t.co/CnpNNs5f6Y

Evers: family structures is a key issue. In Sweden we have available child care and the ability to divide child care responsibilities between men and women #HBPGenderMatters