The 3rd version of the position paper on the vision for the coming decade of digital brain research has just been published. Researchers worldwide are invited to contribute to the paper by submitting comments or adding their names to the list of supporters. 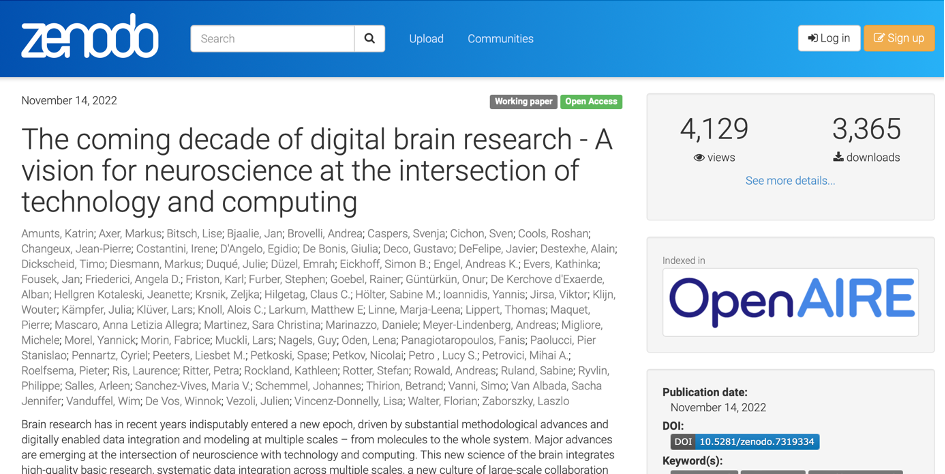 The position paper outlines a vision for neuroscience at the intersection of technology and computing. It stresses how a systematic approach will be essential in meeting the pressing medical and technological challenges of the coming decade.

The paper is being developed in an open and highly interactive process that has been initiated by the Science and Infrastructure Board (SIB) of the Human Brain Project (HBP) and is open to the entire research community beyond the HBP. Comments are continuously reviewed and integrated, and updates of the manuscript published every few months.

“In this third edition, once again valuable input has been provided and integrated from researchers around the world at different stages in their career. We are happy that such input comes from both inside and outside the HBP community,” says HBP Scientific Director Katrin Amunts. “High engagement, readership and downloads show us that the paper is timely in this moment in neuroscience.”

The common position paper is being drafted with the aims of developing a concept for the coming decade of digital brain research and identifying points of convergence and common goals. The authors are convinced that discussions around the theme of digital brain research will help drive progress in the broader field of neuroscience. Thus far, 80 authors from 15 countries and 90 institutions have contributed to the vision paper.

In addition to commenting on the manuscript, researchers worldwide may express their support of the position paper. Some of those who have already added their names to the list of supporters are leading figures in the field, others are young scientists that will have impact in the future.

“As a European working in the US, I strongly support this initiative, it could help put European neuroscience in a leadership position, and help European countries capitalize on the benefits of working together towards the same goal,” comments Rafael Yuste, co-initiator of the US BRAIN Initiative and Professor of Biological Sciences and Neuroscience at Columbia University, in his statement of support.

The new science of the brain described in the manuscript integrates high-quality basic research, systematic data integration across multiple scales, a new culture of large-scale collaboration and translation into applications.

Publication: Amunts et al. (2022). The coming decade of digital brain research - A vision for neuroscience at the intersection of technology and computing (Version 3.0)

Commenting: To submit comments to the current version of the manuscript, please use the commenting form here.

Support: If you would like to express your support of the contents of the manuscript and be added to the list of supporters, please use the online form here.