A team of scientists is using the tools offered by the HBP’s digital research infrastructure EBRAINS to address one of the oldest enigmas in neuroscience: the dichotomy of brain structure and function. 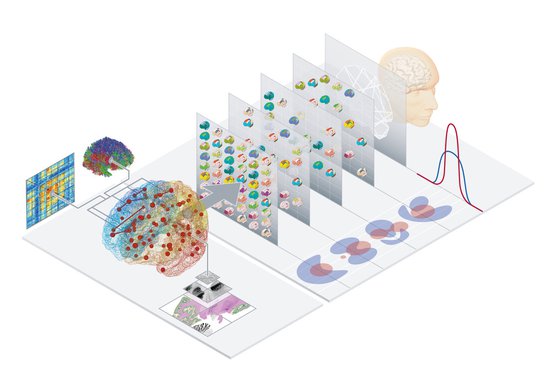 Every human brain is different. But even with structural differences, individual brains function in a similar way. In other words, there are functional brains based on completely different configurations. At the same time, a structural change may cause loss of function in one brain, but have no consequences in another individual. Or a drug cocktail may be efficient for one patient, and have no effects for another.

This phenomenon of multiple configurations leading to the same result is called “degeneracy” and represents a key obstacle in neuroscience, as it makes it harder to know the correspondence between brain activity and brain function.

The HBP’s Showcase “Degeneracy in neuroscience – when is Big Data big enough?” demonstrates how cutting-edge datasets on structural variability can be used to build whole-brain models that can help us understand the brain and its functional variability. It establishes a link between EBRAINS’ multilevel human brain atlas and The Virtual Brain (TVB) simulator – a platform for constructing and simulating personalised brain network models.

The starting point of this work was the creation of a virtual cohort of ageing brains, from the large database of the 1000BRAINS study of the Jülich Research Centre (Germany). In this population-based cohort study, more than 1,000 people with ages between 55 and 85 have been examined by magnetic resonance imaging (MRI), which generated an unprecedented amount of data.

In order to create this virtual cohort, the researchers extracted the structural data from the 1000BRAINS and systematically characterised the connectome information for every single subject’s brain.

“Where does healthy ageing stop and pathological ageing begin? How can we push the onset of pathological ageing further in the future? Can we stop it? These questions are being tackled with this work, and it cannot be done only experimentally, we need model-based approaches in order to get answers,” explains Viktor Jirsa, leader of the HBP’s multiscale connectome focus area, Chief Science Officer of the HBP’s EBRAINS infrastructure, Director of Research at CNRS (Centre National de la Recherche Scientifique) and Director of the Inserm Institut de Neurosciences des Systèmes (INS).

The HBP researchers are doing exactly that: taking a model-based approach in order to disentangle ageing mechanisms, which are difficult to be figured out due to neurodegeneracy.

In order to understand how variability might work in the brain, the researchers hypothesize ageing mechanisms, then integrate the detailed data on ageing into virtual brain models, and simulate the functional brain imaging data of individual brains. Then, they can compare the output of these data-driven models to their experimental data. This way they can test whether the hypotheses of how the brain changes are confirmed.

“We used age as the first factor to be implemented, because data on this is abundantly available. And age is a factor for which at least some theories exist on how it might affect the brain in a systematic way,” explains Svenja Caspers, deputy leader of the HBP’s multiscale connectome focus area and professor at Heinrich Heine University Düsseldorf and the Research Centre Jülich (Germany).

“Now that we have this working model, we would like to widen our view and integrate other factors as well,” she says.

The scientists expect that, ultimately, a better understanding of brain variability will assist in the effort to deliver personalised brain medicine, for instance, for patients with disorders such as Parkinson’s disease or dementia.

Degeneracy is a fundamental question of neuroscience that had not yet been approached in this way. The HBP scientists are going through uncharted territory, and while the outcomes of these efforts are still open, they will definitely represent significant advances on brain simulations.

On 14 September 2022, Lisa Otten interviewed Svenja Caspers, Director of the Institute of Anatomy 1 at Heinrich-Heine-University and group leader ‘Connectivity’ at the Institute of Neuroscience and Medicine (INM-1) of the Research Centre Jülich, about how her team has used the Human Brain Project’s digital research infrastructure EBRAINS to address one of the oldest enigmas in neuroscience: the dichotomy of brain structure and function.