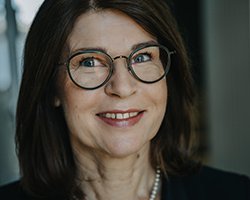 Katrin Amunts is the Scientific Research Director of the Human Brain Project (HBP). She is a full professor and director of the C. and O. Vogt Institute for Brain Research at Heinrich-Heine University Duesseldorf and director of the Institute of Neuroscience and Medicine (INM-1) at Forschungszentrum Jülich. Her research focuses on organizational principles of the brain and how its structure relates to function and behaviour. Her team has developed the Julich Brain Atlas.

Viktor Jirsa is Leader of the HBP’s multiscale connectome focus area and Chief Science Officer of the HBP’s EBRAINS infrastructure. He is Director of Research at CNRS (Centre National de la Recherche Scientifique) and Director of the Inserm Institut de Neurosciences des Systèmes (INS). His research is focused on gaining a deeper understanding of the mechanisms underlying the emergence of brain function and dysfunction from brain network dynamics. His team has developed The Virtual Brain – personalized models to simulate the human brain.

In a recent publication, you state that the field of neuroscience is “at the beginning of a new paradigm for understanding the brain.” What characterizes this paradigm shift?

Katrin Amunts: The way we study the brain has changed fundamentally in recent years. In the past, separate communities have often focused on specific aspects of neuroscience such as cognitive neuroscience or cell biology, and the problem was always how to link the different worlds, for example, in order to explain a certain cognitive function in terms of the underlying neurobiology. The Human Brain Project has brought together communities from different disciplines and countries in a large-scale approach to work collaboratively on a common goal.

The human brain is one of the most complex systems, and we still don’t understand many of the basic principles of its function. One challenge is that the brain is organized on multiple spatial and temporal scales. Consequently, brain data often are very large and complex. They need to be integrated in order to gain a comprehensive understanding of this extremely complex system, and we need to link data about structure and function. In the Human Brain Project, we have tackled this challenge by building a new digital, collaborative research platform (EBRAINS). Building such a platform was the focus of the Human Brain Project from the very beginning. EBRAINS enables the integration of data from various research groups from different countries and with distinct approaches. It provides a range of different digital tools and services supporting brain researchers. This also includes access to powerful supercomputing systems via the infrastructure Fenix, which has been set up by Europe’s leading Supercomputing Centres as part of the HBP and will serve communities beyond brain research.

Amunts: Modelling and simulation but also deep-learning and machine-learning-based analysis are becoming increasingly relevant. Digital tools allow us to perform new experiments that would otherwise not have been possible to do in the human brain – or even in the mouse brain. In this way, technological advances have opened up a second line of research in addition to the empirical work.

Viktor Jirsa: We are now combining a bottom-up with a top-down approach. The bottom-up approach tries to explain a very complex function starting from the building blocks in the brain and is applied, for example, in the construction of computational brain models. The top-down approach starts from behaviour and cognition and then tries to better understand what the biological substrate of a certain function is. In the past, these two approaches were often discussed as excluding each other – this has been regarded as one of the biggest challenges in neuroscience. Now, we see it as a necessity to take a mixed approach to understand the brain. You need to integrate the two and use one approach in order to better explain the other and vice versa. The reason for this is the brain’s multi-scale and nonlinear nature, meaning that, on the one hand, multiple mechanisms within the brain can give rise to the same behaviour – a property referred to as neurodegeneracy – and, on the other hand, the same regulatory system can induce multiple distinct behaviours. In order to find a good solution within this complex system you need to tackle it from two sides using the bottom-up and top-down approaches in synergy.

Did it require a large-scale initiative like the Human Brain Project to achieve the paradigm shift that you describe?

Amunts: Yes. The first reason is the large number of researchers involved: To advance a research field to this extent, a critical mass of researchers needs to be united under a common umbrella. It required researchers from the whole of Europe because the different countries and institutions have different strengths. With this large-scale approach, we were also able to cover the full spectrum of human brain research.

The second reason is the time span. Developing collaboration but also technological solutions that go beyond one’s own research discipline simply needs a lot of time and also systematic planning with a time perspective that allows for the achievement of ambitious goals.

The third reason is that the brain is the most complex research subject you can have and this requires a flagship approach rather than a multitude of single small projects which, in the end, do not come together. What makes the Human Brain Project stand out is that we have very strong specialized research projects in the individual disciplines and, at the same time, we also have a common understanding of how we want to decode the human brain – these have resulted from intense scientific exchange and discussions over many years.

Jirsa: And it is not enough that the different domains are connected and able to speak to each other. You also need to have dedicated research personnel that enable interoperability between the domains. For example, you need informaticians who develop tailored application programming interfaces that enable applications of different domains to communicate with each other. We have achieved major breakthroughs thanks to an exceptionally high-level of interoperability. This has been absolutely critical and its emergence was only possible thanks to the Human Brain Project.

How can this type of large-scale, collaborative research be continued after the HBP flagship ends in 2023?

Jirsa: The first prerequisite, and perhaps the most important one, is that EBRAINS is now on the ESFRI Roadmap of European research infrastructures – clear recognition of its lasting value to the research community. With EBRAINS, we have the platform and the tools to continue brain research in a highly collaborative way after the flagship, and it will now be crucial that the infrastructure is continuously developed according to the needs of the research community.

Amunts: We are currently discussing the future of the research field beyond 2023 with the community at large. Together, we are drafting a position paper identifying common goals and outlining our scientific vision for the next decade.  A systematic approach will be essential to meet the challenges of the future – in brain medicine and technology alike.

Jirsa: The field is progressing from generic modeling at low resolution to high-resolution models with applications in clinics. Projecting this development into the future, our vision is to build digital twins of individual brains: virtual brain models that are continuously informed and updated by real-world data. We can, for example, feed in patient-specific functional and structural data, but potentially also environmental data. It is important to note, however, that we do not claim that such models will capture every single detail – rather, they would always be constrained by data from their biological counterpart. Such virtual models allow us to perform simulations under the same conditions as appropriate for the individual patient in order to improve diagnostics and therapy. They also allow us to test basic research hypotheses about the brain’s organization, and they will pave the way for novel neuro-technology.

How can interested brain researchers participate in the discussion around the science vision?

Amunts: We have published first versions of the vision paper on Zenodo and are inviting the entire community to enter the discussion by commenting via an online platform. We review and discuss each comment that has been submitted and regularly update the living document by publishing new versions every few months. Everyone who contributes with comments will be considered for authorship, and there is also an option to add your name to the list of supporters of the vision. We aim to engage a broad community beyond the Human Brain Project and hope that this open discussion will drive progress in the broader field of neuroscience.

The interview was conducted by Lisa Vincenz-Donnelly and Peter Zekert.