Understanding consciousness is one of the greatest challenges of neuroscience. Is it possible to develop brain-based measures of consciousness? Why does it fade and recover during transitions across brain states? Researchers at the Human Brain Project (HBP) are addressing this challenge by merging new clinical methods and advanced brain modelling on the EBRAINS research infrastructure. Over the past years, they used a novel approach to investigate brain activity in conscious and unconscious states from the micro-level to the whole brain. 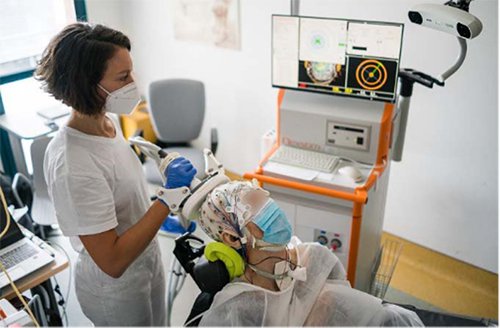 Each year, about a million patients worldwide are sent to emergency services after a brain injury, with levels of consciousness that are difficult to assess. Medical doctors need to ensure that they will identify when a person is minimally conscious and potentially able to recover. That’s why detecting the fundamental mechanisms of consciousness is crucial, not only for better diagnosis, but also to guide recovery in the best way possible.

Clinical scientists of the HBP (in Italy and Belgium) have established methods to assess levels of consciousness directly from brain activity. Marcello Massimini, a medical doctor and Professor at the University of Milan, and his team have devised a method for an objective brain-based measure of consciousness levels, called Perturbational Complexity Index (PCI).

Steven Laureys, MD neurologist, founded the Coma Science Group at the University Hospital of Liège to translate these novel technologies to improve the clinical care in both intensive care and chronic neuro-rehabilitation settings. With his team they have cross-validated PCI against neuro-imaging technologies such as functional MRI and metabolic PET (positron emission tomography) measures.

The approach consists of non-invasively applying a magnetic pulse to a small brain region, which makes the neurons fire, and simultaneously recording the overall brain response. The complexity of the brain waves is then calculated. As the scientists have shown in awake, sleeping, anaesthetised subjects, as well as in patient studies, the resulting values are suitable to assess the consciousness level of a person.

Bottom-up construction of a whole-brain model

The pattern of brain response to external stimuli in many ways depends on the state of the brain. To better understand this relation, Massimini collaborates with theoretical neuroscientists in the HBP led by Alain Destexhe, research director at CNRS in Paris-Saclay University, to model and simulate these brain states in the computer.

To understand the PCI data, Destexhe and his team construct models of the brain networks associated with different states of consciousness. These computational models allow to integrate data across different scales on the brain – from the levels of neurons up to the whole brain, and to simulate the dynamics. The HBP scientists used a bottom-up approach, going from the cellular level up to the whole-brain level. For that, they used mean-field models integrated in , an EBRAINS-powered tool that allows to model and predict activity in the whole brain, and can be adapted to the brain of an individual patient.

For the clinicians, this brings new insight into what’s behind the data they can measure: "Such a thorough multiscale exploration is unique and provides a solid mechanistic background”, says Marcello Massimini.

, the HBP researchers investigated brain responsiveness in the wake-sleep cycle in humans. Now, they extended these simulations of full brain activity in anaesthetised states, during spontaneous activity and after magnetic stimulation, with data from other labs. These simulations were made for three species: human, macaque monkey and mouse, using the same procedure of matching models to experimental data.

“So far, we have investigated wakefulness and either sleep or anaesthesia”, says Alain Destexhe. "For the future of this work, we would like to extend to various other states of consciousness, including intermediate states, such as some pathological states of coma or patients suffering from brain lesions”.

The first live interview was on Brain Complexity and Consciousness. It took place on Wednesday 22 June at 14:15 CET.

Steven Laureys, clinical neurologist and research director at FNRS and director of the GIGA Consciousness Research Unit at the University Hospital of Liège, hosted the interview. You can read more about his team's work on using AI to measure consciousness . He interviewed Alain Destexhe, Research Director at CNRS and Director of the European Institute for Theoretical Neuroscience, and Marcello Massimini, Professor in the Department of Biomedical and Clinical Sciences at the University of Milan.