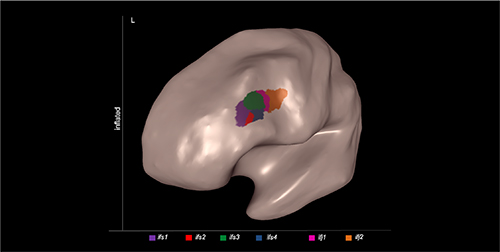 Localisation of the six newly identified areas ifs1-4, ifj1, and ifj2 of the left hemisphere. Figure adapted from Ruland et al. 2022 (CC BY 4.0).

Scientists of the Human Brain Project (HBP) have identified six new areas that form a functional region with a crucial role in cognitive functions of the lateral prefrontal cortex of the human brain. The team from Forschungszentrum Jülich, Heinrich Heine University Düsseldorf and RWTH Aachen University showed for the first time that the inferior frontal sulcus (IFS) and its junction (IFJ) are subdivided into six distinct areas, which are associated with working memory, language and music processing, among other functions.

In the past, the microstructure of the inferior frontal sulcus has received little attention as compared to its neighbouring areas, and previously existing brain maps do not distinguish separate areas within this sulcus. “Sulci make up one third of the brain’s surface, but not many sulci have been systematically mapped yet. Most brain maps are limited to the outer folds, the gyri,” says first author Sabine Ruland.

The HBP researchers combined receptor- and cytoarchitecture to map those areas and to integrate the maps into the broader context of the Julich Brain Atlas. They explored the functions and connectivity of the newly identified areas using the BrainMap database. The new maps are available through the EBRAINS Multilevel Brain Atlas of the Human Brain Project.

Specifically, the study found that IFS and IFJ areas of the left hemisphere were associated with language-related and working memory processes, whereas their right hemispheric correlates were involved in music processing, working memory, and attention processing.  “These findings change our understanding of how the prefrontal cortex is organized,” says Sabine Ruland.

The study was published in Cortex.