Human Brain Project researchers have used whole-brain virtual models to simulate what happens when neurostimulation is applied to aging human brains. These models provide new insight into how the dynamics of a healthy brain change as it grows old, and crucially, could help identify new targets and strategies for therapeutic neurostimulation.

As the brain ages, it “reorganizes” itself: its neurodynamics and the connections between neurons change dramatically, often resulting in a decrease of cognitive functions. Noninvasive brain stimulation techniques, such as applying electrical or magnetic currents, have recently emerged as possible treatments for neurological and degenerative disorders, contrasting and mitigating the natural effects of aging.

However, large scale experimental studies on healthy human brains have obvious ethical implications. A group of Spanish researchers, led by Gustavo Deco from the Universitat Pompeu Fabra, Barcelona, were able to overcome these limitations with the help of modeling and simulation. Their study was published in Cerebral Cortex and used neuroimaging data of 620 healthy adults, collected during previous research - half of them aged over 65 years, the other half below 65 years. The team looked for key differences between the brain states of the two groups, and identified a brain state similar to the  so-called “rich club” region, a network of 12 brain hubs well connected with each other. 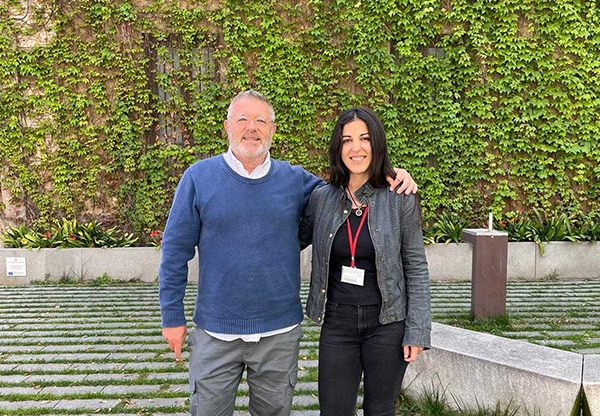 Gustavo Deco and Anira Escrichs, lead authors of the study

“We found that older participants had reduced capacity to access a brain state overlapping with the brain’s rich club organization. This state is key for the efficient transmission of information within the brain,” explains Anira Escrichs from Universitat Pompeu Fabra, first author of the study.  “We successfully simulated the brain states detected in the older group in a whole-brain computational model. We then applied artificial stimulations in all brain regions of the model, looking for a way to induce a brain state similar to the one observed in the younger participants.” The team found that some brain areas were optimal to force the transition from the older to the middle-aged regime - and they identified the precuneus, a prominent region of the rich club, as the best target.

The long-term work of the team in the HPB Flagship was crucial for the creation and investigation of computational models of the human brain supporting transitions between brain states. In addition to providing new information about how the brain reacts differently to external stimulation depending on age, the study could also lay the groundwork for new therapeutic approaches. “We believe that these findings could have important implications for designing neurostimulation interventions and reversing the effects of aging on the functionality of the brain,” concludes Escrichs.