A system developed by Grégoire Courtine and Jocelyne Bloch at HBP partners EPFL and CHUV now enables patients with a complete spinal cord injury to stand, walk and even perform recreational activities like swimming, cycling and canoeing. An important element for the success is a digital atlas of the human spinal cord. It contains computational models of the neural circuitry in the spinal cord that were created by the team around Courtine within the Human Brain Project. The atlas has now been presented as part of a larger article about the approach in the latest edition of Nature Medicine. 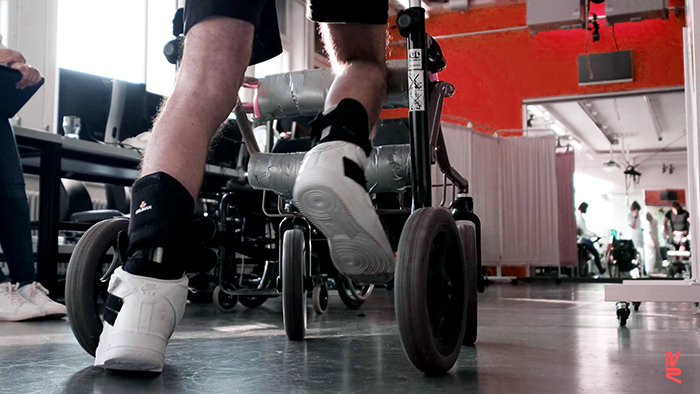 The images made headlines around the world in late 2018. David Mzee, who had been left paralyzed by a partial spinal cord injury suffered in a sports accident, got up from his wheelchair and began to walk with the help of a walker. This was the first proof that Courtine and Bloch’s system – which uses electrical stimulation to reactivate spinal neurons – could work effectively in patients.

Fast forward three years, and a new milestone has just been reached. The research team led by both Courtine, a professor at EPFL, and Bloch, a professor and neurosurgeon at CHUV, has enhanced their system with more sophisticated implants controlled by artificial- intelligence software. These implants can stimulate the region of the spinal cord that activates the trunk and leg muscles. Thanks to this new technology, three patients with complete spinal cord injury were able to walk again outside the lab. “Our stimulation algorithms are still based on imitating nature,” says Courtine. “And our new, soft implanted leads are designed to be placed underneath the vertebrae, directly on the spinal cord. They can modulate the neurons regulating specific muscle groups. By controlling these implants, we can activate the spinal cord like the brain would do naturally to have the patient stand, walk, swim or ride a bike, for example.”

Activating motor sequences at the push of a button

On a cold, snowy day last December, Michel Roccati – an Italian man who became paralyzed after a motorcycle accident four years earlier – braved the icy wind to try out the system outdoors, in central Lausanne. He had recently undergone the surgical procedure in which Bloch placed the new, implanted lead on his spinal cord.

Scientists from Courtine and Bloch’s .NeuroRestore research center were with him, helping to prepare the demonstration. They attached two small remote controls to Michel’s walker and connected them wirelessly to a tablet that forwards the signals to a pacemaker in Michel’s abdomen. The pacemaker in turn relays the signals to the implanted spinal lead that stimulates specific neurons, causing Michel to move. When he was ready, Michel grasped the walker and set off. He pressed the button on the right side of the walker with the firm intention of taking a step forward with his left leg. His left foot rose like magic and fell to the ground a few centimeters ahead. He then did the same thing with the button on his left side, and his right foot moved forward. He was walking! “The first few steps were incredible – a dream come true!” he says. “I’ve been through some pretty intense training in the past few months, and I’ve set myself a series of goals. For instance, I can now go up and down stairs, and I hope to be able to walk one kilometer by this spring.”

Two other patients have also successfully tested the new system, which is described in an article appearing today in Nature Medicine.“Our breakthrough here is the longer, wider implanted leads with electrodes arranged in a way that corresponds exactly to the spinal nerve roots,” says Bloch. “That gives us precise control over the neurons regulating specific muscles.” Ultimately, it allows for greater selectivity and accuracy in controlling the motor sequences for a given activity.

One day is all it takes

Extensive training is obviously necessary for patients to get comfortable using the device. But the pace and scope of rehabilitation is amazing. “All three patients were able to stand, walk, pedal, swim and control their torso movements in just one day, after their implants were activated!” says Courtine. “That’s thanks to the specific stimulation programs we wrote for each type of activity. Patients can select the desired activity on the tablet, and the corresponding protocols are relayed to the pacemaker in the abdomen.”

While the progress achievabe in a single day is astonishing, the gains after several months are even more impressive. The three patients followed a training regimen based on the stimulation programs and were able to regain muscle mass, move around more independently, and take part in social activities like having a drink standing at a bar. What’s more, because the technology is miniaturized, the patients can perform their training exercises outdoors and not only inside a lab.

“This study further demonstrates the benefits of our approach,” says Courtine. “We’re now working with ONWARD Medical, which recently listed on Euronext, to turn our discoveries into genuine treatments that can improve the lives of thousands of people around the world.”