Researchers at Human Brain Project partner University of Granada in Spain have designed a new artificial neural network that mimics the structure of the cerebellum, one of the evolutionarily older parts of the brain, which plays an important role in motor coordination. When linked to a robotic arm, their system learned to perform precise movements and interact with humans in different circumstances, surpassing performance of previous AI-based robotic steering systems. The results have been published in the journal Science Robotics. 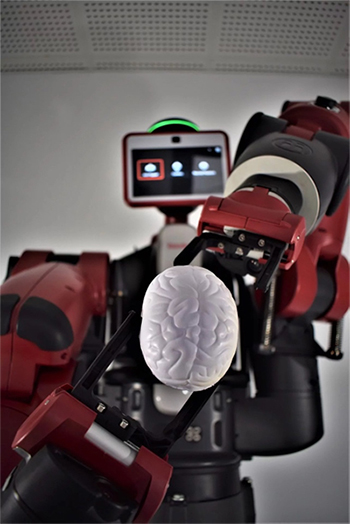 The Robot used by the Applied Computational Neuroscience research group of the University of Granada. © Ignacio Abadía

It is the most biologically realistic and detailed model of the cerebellum to date capable of work in real-time, and replicates not only aspects of the structure, but also its adaptability and capacity to learn. By taking inspiration from the brain in this way, the scientists were able to solve one of the common technological challenges in robotics: Their cerebellar spiking neural network enables the robot to deal with so-called latency, or time delays, which is a central real-world problem for computational systems in robotics, especially during wireless or remote steering.

The research could also help to control new bio-inspired robots, which are equipped with elastic and flexible components that replicate the muscles and tendons of the human body. Such “co-bots” are safer for human interaction, but their flexibility makes it difficult to use classical control techniques.

The work of the Applied Computational Neuroscience research group - led by Prof. Eduardo Ros - has been published in the journal Science Robotics.

Other Neurorobotics work in the Human Brain Project:

A robot on EBRAINS has learned to combine vision and touch
On the new EBRAINS research infrastructure, scientists of the Human Brain Project have connected brain-inspired deep learning to biomimetic robots. Read more

EBRAINS robot simulation one step closer to in-hand object manipulation
A team of scientists in the Human Brain Project is using the EBRAINS research infrastructure to learn more about how the brain coordinates complex hand movements. Read more