Uncovering the mechanisms of learning via synaptic plasticity is a critical step towards understanding how our brains function and building truly intelligent, adaptive machines. Human Brain Project researchers from the University of Bern propose a new approach, in which algorithms mimic biological evolution and learn efficiently through creative evolution. 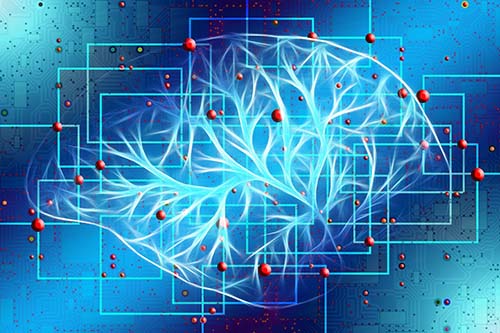 Our brains are incredibly adaptive. Every day, we form new memories, acquire new knowledge, or refine existing skills. This stands in marked contrast to our current computers, which typically only perform pre-programmed actions. At the core of our adaptability lies synaptic plasticity. Synapses are the connection points between neurons, which can change in different ways depending on how they are used. This synaptic plasticity is an important research topic in neuroscience, as it is central to learning processes and memory.

To better understand these brain processes and build adaptive machines, researchers in the fields of neuroscience and artificial intelligence (AI) are creating models for the mechanisms underlying these processes. Such models for learning and plasticity help to understand biological information processing and should also enable machines to learn faster.

Working in the Human Brain Project, researchers at the Institute of Physiology at the University of Bern have now developed a new approach based on so-called evolutionary algorithms. These computer programs search for solutions to problems by mimicking the process of biological evolution, such as the concept of natural selection. Thus, biological fitness, which describes the degree to which an organism adapts to its environment, becomes a model for evolutionary algorithms. In such algorithms, the "fitness" of a candidate solution is how well it solves the underlying problem.

The newly developed approach is referred to as the "evolving-to-learn" (E2L) approach or "becoming adaptive". The research team led by Dr. Mihai Petrovici of the Institute of Physiology at the University of Bern and Kirchhoff Institute for Physics at the University of Heidelberg, confronted the evolutionary algorithms with three typical learning scenarios. In the first, the computer had to detect a repeating pattern in a continuous stream of input without receiving feedback about its performance. In the second scenario, the computer received virtual rewards when behaving in a particular desired manner. Finally, in the third scenario of "guided learning," the computer was precisely told how much its behavior deviated from the desired one.

“We see E2L as a promising approach to gain deep insights into biological learning principles and accelerate progress towards powerful artificial learning machines”, says Mihai Petrovoci. "We hope it will accelerate the research on synaptic plasticity in the nervous system," concludes Jakob Jordan. The findings will provide new insights into how healthy and diseased brains work. They may also pave the way for the development of intelligent machines that can better adapt to the needs of their users.

This work was supported by the European Union (Human Brain Project) and the Manfred Stärk Foundation. The Gauss Centre for Supercomputing e.V. co-funded this project by providing computing time through the John von Neumann Institute for Computing (NIC) on the GCS Supercomputer JUWELS at Jülich Supercomputing Centre (JSC). Fenix Infrastructure resources were used and partially funded from the European Union’s Horizon 2020 research and innovation program through the ICEI project. All network simulations were carried out with NEST.

Read the original press release by University of Bern

The University of Bern contribution to the Human Brain Project

The Human Brain Project (HBP) is the largest brain science project in Europe and stands among the biggest research projects ever funded by the European Union. At the interface of neuroscience and information technology, the HBP investigates the brain and its diseases with the help of highly advanced methods from computing, neuroinformatics and artificial intelligence, and in turn drives innovation in fields like brain-inspired computing and neurorobotics The long-term contribution of the HBP is EBRAINS, a permanent open platform for neuroscience and computing in the form of a European research infrastructure that will remain in place beyond the project period 2023. The Institute of Physiology at the University of Bern is involved in the HBP thanks to the groups of Dr. Mihai Petrovici and his collaborator, Prof. Dr. Walter Senn. In 2020, they received a grant of 2.5 million euros for this purpose. The groups are developing theoretical models of neurons and networks in the brain that link behavior, learning, and the corresponding processes and changes in the brain. The theories are based on biophysical concepts and allow reconstruction of biological processes in so-called neuromorphic hardware, i.e. computer chips that function similarly to the brain itself.