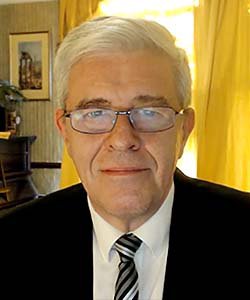 Karl Friston is Scientific Director at the Wellcome Trust Centre for Neuroimaging at University College London and has joined the Human Brain Project (HBP) as a lead scientist in early 2021. Among other achievements, Friston has developed one of the main methods behind MRI neuroimaging and formulated the important free-energy principle for action and perception in neurobiology. In advance of the HBP summit, we spoke to the theoretical neuroscientist about his exciting work on developing computational brain models, the potential of the Human Brain Project and what we can expect from his keynote lecture at the summit.

Professor Friston, you have joined the Human Brain Project as a lead scientist to develop personalized brain models. What is the significance of such models for medicine?

They provide a formal, crisp and clear account of how brains might go wrong, particularly in neurology and in psychiatry. By ‘formal’ I mean a way of articulating your mechanistic hypotheses about psychopathology in concrete terms—to the extent that you can write it down in a computer. And once you can do that, you can start to simulate the pathology, the abnormal behaviours, the abnormal message passing, the disintegration or discoordination of neural activity that underwrites false inference that underwrites, for example, depression or anxiety.

One can then make predictions about the specific cause and, indeed, can intervene in your simulation. You can do in silico lesion experiments and in silico psychopharmacology without endangering a patient through some exuberant experimental intervention. In this way, I see a great potential for the facilities that the Human Brain Project—and in particular its EBRAINS infrastructure—has to offer.

What is your approach to building such models?

My approach inherits from theoretical neurobiology and two simple questions: How does the brain work? And how would you understand an aberrant brain?

The idea is that psychology is effectively a description of the way that we make inferences about the world. This means that psychopathology is what happens when we make false inferences. Simple examples of this would be seeing, or inferring, something is there where it is not as in hallucinations or delusions, or inferring something is not there when it is, like in agnosia. You can construe most neurological psychiatric syndromes as false inference.

One of the key things that can go wrong is the way you represent uncertainty in making choices, in making inferences and in making sense of the world. The way that the brain encodes this uncertainty – or its converse, precision – is in terms of “synaptic efficacy” or simply put, the strength of communication between neurons, which is mediated by their contact points, the synapses. And these are changes that can be measured.

The ambition of this approach is to be able to make predictions about the kind of measurements that you might expect to make if you are using electromagnetic recordings or brain imaging with accompanying behavioural and subjective reports from the patient. But that rests upon having the right kind of computational model with which you can explore these ideas and hypothesis, which brings us back to the Human Brain Project and EBRAINS.

Where do you see the greatest potential of working within the Human Brain Project?

From my perspective, the generic benefits are the wealth of expertise that has been accumulated over the years, if not decades, that provide an enabling forum. I have seen the Human Brain Project mature—and go through various phases and childhood ailments over the years. Indeed, I remember spending Christmas eve in a German airport hotel shouting about the course of the Human Brain Project in its infancy. I was an advisor to the European Union at the time. To my eyes, the Human Brain Project has changed fundamentally over the past few years under the stewardship of people like Katrin Amunts and all of her colleagues. The impression I have is that it has now become a truly enabling endeavour—it is there to enable.

But it is enabling in a very specific way: in a way that makes full use of the eclectic expertise both within and beyond Europe, and, in particular, expertise drawn from fields from outside neurobiology, such as computer science and all the attendant fields, like neuromorphic computing and data science. The Human Brain Project has integrated all of this in a way that neuroscientists effectively work together with computer scientists who know how to organise and annotate data and make it available: the kind of expertise that people like me certainly do not have. This culminates in a resource that will enable everybody around the world.

Those are the generic benefits of the Human Brain Project, but specifically, it is exactly the kind of initiative, which has the right resources for someone who is committed to pursuing and progressing neuroscience, in my case clinical neuroscience, in a way that is formally articulated in terms of equations, in terms of simulations, and in terms of high-end data science.

What were for you the most significant changes in the last decades in the way neuroscience is being carried out?

What has happened in the Human Brain Project is possibly a reflection of a general trend in the neurosciences to become more formal in their approach. I am thinking here of the advent of new technologies that rest upon great advances in computer science, the breakthroughs and growing interest in artificial intelligence, machine learning and neural network research. I am also thinking of the convergence and mutual inspiration between fields like machine learning and neuronal networks. Wherever you look you see ‘computational’ in front of what we used to do, and this reflects the fact that young researchers are more and more committed to expressing their hypotheses in a formal and mechanistic way. This ultimately means that if you want to understand how something works—or doesn’t work—you have to be able to replicate and model it explicitly, usually in a computer.

We are looking forward to your keynote lecture at the Human Brain Project Summit. Could you give us a little teaser of what we can expect?

I am going to talk about one of my favourite topics: the computational neuroscience of schizophrenia. My talk will focus on bringing together a purely theoretical neurobiology perspective on how brains work and what that says about the opportunity to understand the mechanics of message passing in the brain—as well as how it might fail in various conditions such as schizophrenia. The idea is to understand schizophrenia as a failure of inference in the brain in terms of abnormal message passing that is relevant for people doing pharmacology and physiology. And I am going to frame that in terms of a synaptopathy—a pathology of synaptic integration.

The interview was conducted by Lisa Vincenz-Donnelly.