The first versions of the cerebro-cortical-cerebellar closed loops models will be available on the Brain Simulation Platform from April 2020.

You can access them via the following Collaboratory links:

Showcase - Cerebellum in the NRP

The loops formed by the cerebral cortex and cerebellum passing through the thalamus and other intercalated nuclei are of great importance for their involvement in sensori-motor and cognitive control. These loops are at the core of the predictive ability of the brain and address therefore the intimate mechanism of whole brain functioning. Given the remarkable advancements in cerebral cortical and cerebellar modeling, we have envisaged that models of the cerebrocortical-cerebellar loops are the starting point for building whole brain models. This approach allows not just to face core brain theories, but also to establish the required modeling techniques and tools and to prepare the ground for a multi-modular expansion toward whole-brain models. We have started with a computational architecture employing a tandem configuration of forward and inverse internal models that is known to enable efficient learning in the cerebellum. The cerebellar modules are inserted in a modular system architecture reproducing functional adaptive loops. Furthermore, this is a key element for robotic controllers and when scaling up and mapping the system in an atlas-based whole brain simulator. The cerebellar microcircuit with detailed structure and dynamics becomes thus part of a complex system, fundamental to understand the mutual roles of the different modules and different neural regions.

The whole brain loops are fundamental to understand the interactive roles among multiple brain regions and modules. A system architecture able to host multiple models and connect them allows to investigate how complex functions emerge. In particular, the cerebrocortical-cerebellum loop is a key element to generate motor, cognitive and emotional control and gives a novel perspective on the mechanisms of implicit learning and memory.

The present aim is to model whole brain functionalities by leveraging on the existing microcircuit cerebellar models. We will model, simulate and validate the forward and inverse controller functions of the cerebrocortical-cerebellar loops in a robotic setting, emulating error-based learning and action prediction. The model will be used to simulate specific sensorimotor tasks in closed loop. The models run in pyNEST, are uploaded on the Brain Simulation Platform (BSP) and adapted also for the Neurorobotic Platform (NRP). The work is aligned with future developments and will continue in SGA3 to include more extended and complex circuit representations. 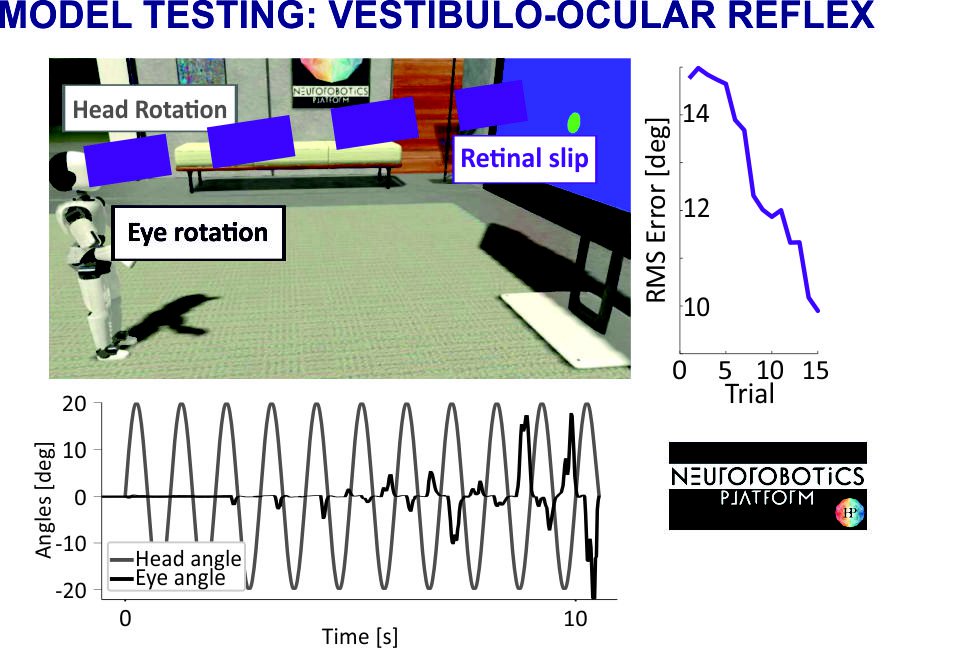 The modular cerebrocortico-cerebellar circuit has been seen as an interesting use-case for different platforms: the BSP (where the cerebrocortico-cerebellar model can be directly launched by the users, eventually exploiting parallel computing) and the NRP (where the same cerebrocortico-cerebellar model can be used as an initial brain model for a neurorobotic plant actuated in a task-dependent environment). The models can be used not only by other HBP partners but also by scientists external to the HBP consortium through simple access pipelines provided by the BSP and NRP. The integration of more biologically inspired components (realistic modelling of cerebral cortex, brainstem, spinal cord and neuromuscular system) is of great interest for several research groups as manifested at the recent Hackathon on Cerebellum Modelling .

In March 2020, as part of the BSP, we have released the first model of a cerebrocortical-cerebellar closed-loop experiment. The aim was to embed plasticity components (such as synaptic learning mechanisms) into the scaffold model and into large-scale brain loops. These BSP models can be used to investigate multiscale cerebellar circuit functions and for applications to neurorobotics. Moreover, these BSP models serve to aggregate the cerebellum modeling community around the BSP and HBP and future EBRAINS.

Collabs, links, and live papers listed in the resources box above.

Participate in community modelling: we would be happy to hear from you if you would like to get involved and contribute to our community effort. For all information, please contact Simona Tritto by e-mail at simona.tritto@unipv.it