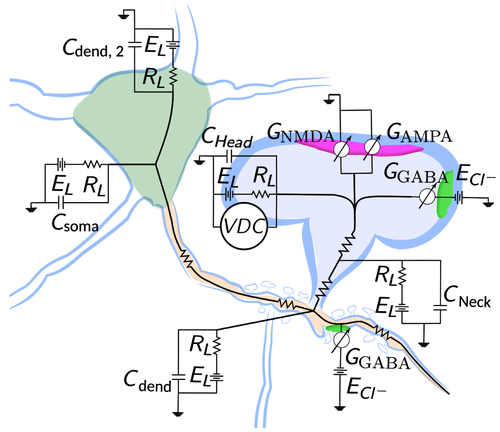 Synaptic function and plasticity depend both on neuronal activity and on a delicate balance between overall structural stability and the continuous rearrangement of its components. We approach its study by different means, quantifying morphological changes and energetic states of multimolecular assemblies over time or by modeling excitatory and inhibitory activity and its consequences on intracellular Calcium. We have already developed a method to study the clustering of scaffold protein gephyrin, which forms postsynaptic clusters that play a key role in the stabilization of receptors at inhibitory synapses. However, the dynamic behavior of the inhibitory synapse depends both on neuronal activity and cytoskeleton integrity. To address this dynamic behavior, we have been studying the interplay between excitatory and inhibitory currents with a fine spatial and temporal resolution, modeling at the same time its consequences on intracellular calcium and subsequent synaptic plasticity.

What makes it exciting?

It is well known that inhibition is a key ingredient in dendritic integration, and it depends on spatial and temporal resolution. For example, inhibitory synapses present in spines, that accounts for roughly 30% of dendritic inhibition in layer 2/3 of the somatosensory cortex, can have very different functionality to perisomatic ones. The spatial and temporal distribution of inhibitory synapses, as well as its morphology and energetic states, raises the question of what is its functionality and its effects on subsequent Calcium signaling and plasticity.

We have addressed issues about morphology and energetic states of inhibitory synapses, published in 2017. We have also studied how its spatial and temporal distribution affects neuronal activity. Specifically, we have focused on accurate morphological data obtained with Correlative-Light-Electron-Microscopy techniques, and we have used them to see the consequences of constraining models of dendritic excitatory and inhibitory signaling.

We have been able to provide an energetic approach to the stability of inhibitory synapses, relating it to its morphological shape. We are modeling the synaptic activity by using cable theory and Hodgkin-Huxley formalism. We constrained the model with actual morphological data obtained from the somatosensory cortex of the mouse.

Model use: If you simply want to use some of the results of this work, you can use our collab in the Brain Simulation Platform and launch one of the respective use cases. Also, you can download from there data and the models that were used.