The cerebellar neuron models can be found on the Brain Simulation Platform.

The following models can also be launched from the Collaboratory producing optimized granule cells models. 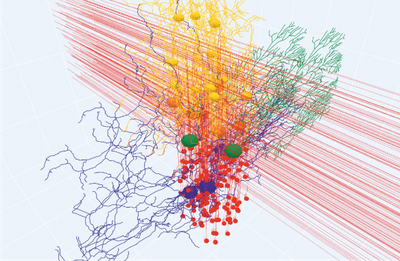 The cerebellum is a major neural structure that contains about half of the brain neurons with specific microcircuit organization and plasticity dynamics. The cerebellum plays an essential role in numerous cerebrocortical loops involved in sensori-motor control, cognition and emotion. A detailed model of the cerebellum is needed, not just to understand inherent microcircuit processing but also to implement large-scale simulations in virtual brains, robotic control systems and neuromorphic supercomputing architectures. Fundamental information on the role and mechanisms of cerebellum can be derived from multiscale simulations reconnecting microcircuit spatio-temporal dynamics to molecular and cellular properties of neurons and synapses.

What makes the cerebellum special?

The cerebellum is known to be involved in a wide set of apparently disparate functions: from motor coordination and learning to visual attention; from timing to sequence learning and generation; and from sensory prediction to Theory of Mind. The inner mechanisms connecting them all within the context of cerebellar functioning still need to be understood.

The cerebellar microcircuit has been the workbench for theoretical and computational modelling since the beginning of neuroscientific research. The regular neural architecture of the cerebellum inspired different solutions to the long-standing issue of how its circuitry could control motor learning and coordination. Computational modelling in HBP therefore plays a major role in developing new theories about cerebellum and brain functioning.

We have developed a scaffold model of the cerebellar network along with detailed models of its neurons and synapses. These models are critical for implementing the Brain Simulation Platform and for explaining experimental data. This multiscale modelling strategy aims at the generation of the first full realistic model of the cerebellar network. The cerebellar model, in collaboration with the partnering projects "cerebNEST", "VM-cerebNEST", and "SPINNcer", is also going to be simplified and used in the Neurorobotics Platform and in the Neuromorphic computing platform to generate novel controllers and computational systems.

In March 2020, as part of the Brain Simulation Platform (BSP), we will complete the release of the fundamental set of detailed multicompartment cerebellar neuron models, along with their simplified single-point version, and the full cerebellar scaffold including cell placement and connectivity.

The aim was to build on the scaffold model developed in the previous phase in order to complete the missing microcircuit components, to update the mechanisms at the basis of these models according to the evolving physiological and anatomical discoveries, to embed subcellular components (such as synaptic plasticity mechanisms) into the scaffold model, to simplify the latter and embed it into large-scale brain loops.

These models can be used to investigate multiscale cerebellar circuit functions and for applications to neurorobotics, neuromorphic hardware and The Virtual Brain. Moreover, these models serve to aggregate the cerebellum modeling community around HBP and the future EBRAINS.

The models are developed using pyNEURON, pyNEST, TVB, (ARBOR in progress), SpiNNaker simulators and are accessible from the Brain Simulation Platform and Neurorobotic Platform.

Building a model of cerebellum from experimental data will improve our understanding of the cerebellar and brain function. It requires a critical mass of people with differentiated expertise, from neurophysiology to biomedicine, neuroengineering and biophysics.

Model use: in the Cerebellum Collab you will find the Data Centre with detailed information about the cerebellar network, the neurons and the connectivity rules.

Results of single cell models derived from optimization procedures can be found in:

You can simply go to the Brain Simulation Platform and launch one of the use cases. Alternatively, you can download data and models as indicated in the above Resource box.

Participate in community modelling: we would be happy to hear from you if you would like to get involved and contribute to our community effort. For all information, please contact Simona Tritto.