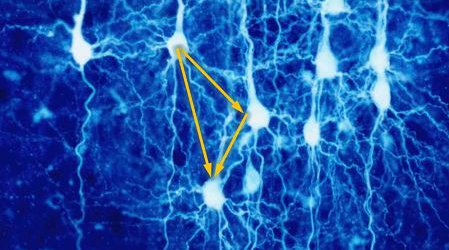 When one thinks of the brain – networks of connected neurons and connected brain regions immediately comes to mind.

Indeed, already in 1949, Donald Hebb suggested that the activity of connected cell assemblies underlie the engram, proposing biological mechanism for forming such assemblies. Hebb’s idea was recently validated by a set of ingenious optogenetic studies, showing that memory is indeed embedded in the activity of local microcircuits. But what is the anatomical structure of these networks? In particular, of local cortical microcircuits? This question is intensely studies using new experimental and theoretical approaches. From large-scale EM (“connectomics”) combined with machine-learning methods to the development of theoretical approaches to characterize the connectivity of local cortical microcircuits, using graph theory and mathematical topology. Multi-patch recordings in vitro from brain slices provided a wealth of new insights on the structure of cortical circuits.

One key question is “what are the principles that govern network structure in cortical microcircuits? are the cell-to-cell connections highly specific or, alternatively, do these connections obey certain general rules?". This is the leading question in this upcoming EITN meeting, which will bring together renowned experts in what could be called “Network Microcircuit Science”.  In this meeting we will focus on:
(i) What is known experimentally about the connectivity of local cortical circuits in both rodents and human?
(ii) How to best analyze the “big data”-based cortical microcircuit topology?
and (iii) Could we already extract, at these early times of “Network Neuroscience” the principles (specific or regular) that govern cortical microcircuit topology?

The registration is free however mandatory due to a limited number of places.

Register for this event