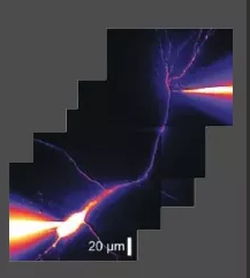 GABAergic interneurons provide inhibitory control of brain activity. A functional hallmark of several types of cortical interneurons is speed. To exert their special functions, these inhibitory neurons are capable of translating an input signal in their dendrites into an output signal from their axon terminals within less than two milliseconds. This high speed of input-output computation enables these interneurons to play a key role in fast neural oscillations that contribute to a wide range of important functions in the brain. To identify the design principle of the remarkably fast signaling, we use parvalbumin-expressing basket cells (PV+-BCs) in the rodent hippocampus and neocortex as our model system to address the following questions:

PV+-BCs play a key role in neural oscillations at high frequencies. To produce temporal coherence during rhythmic oscillations, individual PV+-BCs produce a widespread inhibitory synaptic output signal to entrain the activity of neurons that are distributed in the surrounding network. By performing patch-clamp recordings directly from the thin axon of PV+-BCs, we have demonstrated that a high density of voltage-gated Na+ channels in the interneuron axons enables action potentials to propagate with high speed and reliability (Hu and Jonas, 2014). The fast action potential propagation provides each PV+-BC with a mechanism to synchronize the release of neurotransmitter (GABA) from thousands of axon terminals that are distributed over its extensive axonal arbor. Currently, we are investigating the mechanism that couples action potentials to the release of GABA from PV+-BC axon terminals with high speed.

How does the fast interneuron signaling contribute to sensory processing in the cortex?

To study the neural substrate of behavior, we use the rodent barrel cortex as a model system. This part of the somatosensory cortex processes tactile information coming from the whiskers that rodents use to acquire information about their environment. By using electrophysiological, anatomical, and molecular tools, we aim to identify the role of fast signaling of cortical interneurons in sensory processing. With this knowledge in our hands, we will manipulate dendritic and axonal signaling in cortical interneurons with molecular tools and study how such manipulations modulate sensory processing in vivo.

How is the interneuron fast signaling impaired in diseases?

Being part of the medical faculty at the University of Oslo, a major goal of our research is to improve public health. We are focusing on the Dravet syndrome, which is caused by deficits of the SCN1a gene. The SCN1a gene encodes voltage-gated Na+ channels that are highly expressed in interneuron axons. Mutations of this gene impair inhibitory interneuron functions in the brain and lead to epilepsy in early childhood. We take advantage of our expertise in subcellular electrophysiology to gain a deeper understanding of axonal dysfunctions in the Dravet syndrome.

Our research has two far-reaching implications that are within the scope of the HBP. First, inhibitory interneurons are key elements of the cortical network. Our project will provide important building blocks for constructing network models for in silico simulations of brain functions and diseases. Second, inhibitory interneurons are implicated in a broad range of brain disorders and diseases. Our project may open new avenues for combating brain diseases that are resistant to current medical interventions. 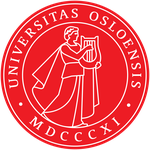 I obtained my PhD degree in neurophysiology at the University of Oslo (UIO) in 2006. I subsequently worked as a visiting scientist at the University of Freiburg and as a postdoc at the Institute of Science and Technology, Austria. I was appointed as an Associate Professor in Physiology by the medical faculty at UIO in 2017.

Fabian Roth studied Biology in Bochum and Bremen (Germany), graduating in Neurobiology with a thesis on the olfactory system in amphibians. He then obtained his PhD (Dr. rer. nat.) in Neurobiology at Heidelberg University (Germany) where he worked on the physiology of GABAergic synapses and the cellular and circuit mechanism underlying the propagation of hippocampal network oscillations. Currently, Dr. Roth is a postdoc in Department of Molecular Medicine at the University of Oslo (Norway) studying axon physiology of cortical interneurons using subcellular patch clamp techniques.

Iulia Glovaci completed her undergraduate studies at Concordia University, where she was awarded a Bachelor’s degree with Honours in 2010. She then pursued her graduate studies at the same university under the guidance of C. Andrew Chapman. Her doctoral research focused on the role of dopamine in modulating glutamatergic transmission in the entorhinal cortex, using electrophysiological and optogenetic techniques to study the neurobiological underpinnings of learning and memory. During her time at the Center for Studies in Behavioural Neurobiology, Iulia participated in several research projects examining the roles of dopamine signaling (in collaboration with Nadia Chaudhri) and glutamate signaling (in collaboration with Uri Shalev) in addiction. Her desire to study the neurobiological basis of learning and memory led her to cross the Atlantic and join Hua Hu’s lab, where she is currently pursuing her postdoctoral training, using advanced electrophysiological techniques to examine inhibitory circuits in the cortex.