The project aims to develop and test methods for the analysis of directional interactions among brain regions in resting state and task-evoked fMRI data in healthy controls and stroke damaged individuals, and to develop a computational model of an injured brain that replicates both the empirically measured patterns of connectivity abnormalities and behavioral deficits.

The overarching goal is to understand the directional interactions between brain areas/networks that predict cognitive deficits at the population level, and model them using whole brain or process specific computational models developed within HBP.

The human brain is a complex dynamic non-linear system where hundreds of billions of neurons and astrocytes organized in columns, cells assemblies, and large scale networks communicate through fluctuating neurochemical signals. Cognitive functions arise out of multiple neuronal interactions in space and time. Correspondingly, these behavioral clusters are predicted by low dimensional alterations of functional connectivity measured at rest with fMRI. These connectivity abnormalities include a disruption of inter-hemispheric integration and intra-hemispheric segregation, which correspond jointly to a global loss of modularity. Interestingly, different deficits are predicted by the topography, not the type, of altered connectivity. The discovery of low dimensional functional connectivity alterations whose topography predicts neurological deficits opens the door to the possibility of using rehabilitation and neurostimulation approaches to treat these alterations hence presumably behavior.

However a major limitation toward these goals is a deeper understanding of directional interactions among brain regions that show altered functional connectivity. Functional connectivity is based on the temporal correlation between two regions therefore it is not directional. Directional influences are difficult to study with slow methods like fMRI. Here we plan to ask very straightforward questions related to the directionality of our low dimensional connectivity patterns in stroke.  A second goal is to use computational tools to model the effects of lesions on neural activity and behavior. We have the rare opportunity of an iterative approach in which computer models of network dysfunction can be validated on real data and behavior. 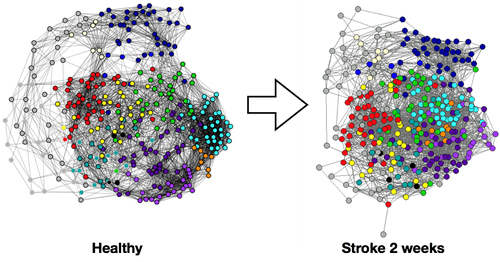 Spring embedded graph of fMRI correlations between different cortical regions and networks. Note that networks (nodes of different colors) are nicely segregated in the healthy brain while tend to collapse and get mixed up at 2 weeks post-stroke. This effect occurs after a lesion and reflects a loss of brain modularity, which in turn correlates with behavioral deficits. The goal of this project is to study the directional influence of one area onto another to understand and model these network wide alterations in brain function.

We are planning to develop methods for the analysis of directional interactions between brain areas in R-fMRI and task fMRI data sets in healthy and stroke subjects.  These methods are of general value for studying brain connectivity both in humans and experimental animals. We will provide a unique stroke database for testing ideas about connectivity and individualized prediction in stroke, specifically with regard to subacute deficits and recovery of function. Theoretical studies will greatly benefit from empirical connectivity and behavioral data that can be used to validate theoretical computational models. The signals could be also used for implementing stimulation and brain computer interface application in neurological diseases, not only stroke. 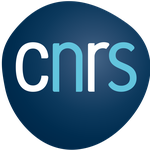