The Human Brain Project is a FET Flagship constituted around a Core Project and Partnering Projects. The original HBP Core Project aims and structure were set out in a Report to the European Commission , published in April 2012. The Core Project is supported by successive EU grant agreements and is being delivered in different phases. The first began in October 2013 under the EU 7th Framework Programme for R&D (FP7). On 30 October 2015, the overall plan and road map for the Project was agreed and the Human Brain Project Framework Partnership Agreement was signed to cover the Flagship implementation under the EU 8th Framework Programme for R&D (FP8), which is also known as “Horizon 2020”. Each grant under this FP is called a Specific Grant Agreement (SGA).

Each SGA , which outlines the exact Consortium, the work plan and budgets in detail, is negotiated between the organisations participating in the Flagship and the European Commission. You can view the public HBP reports of each grant on our Deliverables Pages. 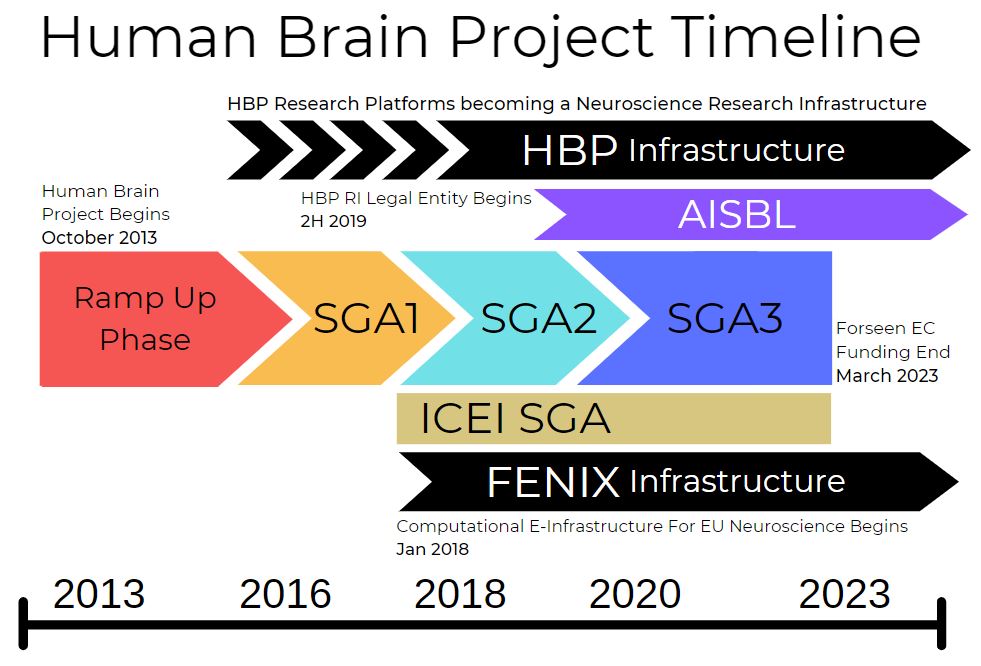 A parallel SGA to support computing e-Infrastructure the "Interactive Computing E-Infrastructure (ICEI) for the Human Brain Project" began on 1 January 2018 and will run until the end of HBP under Horizon 2020.

The last Core Project SGA under H2020, SGA3, began on 1 April 2020, was planned to run for three years, and has been extended for 6 months more until September 2023. Figure 1 above shows that the HBP is planning to continue its work beyond the end of the EU-funded Flagship Project through a new legal entity (LE), the EBRAINS AISBL, that was created to coordinate the HBP and to manage the Research Infrastructure for computational neuroscience developed by the HBP, EBRAINS.

With the current grants, either complete or still underway, the total max EU Contribution to the Flagship currently stands at 406 M€.

The Ramp Up Phase of the Core Project (under FP7)

The Ramp Up Phase began on 1 October 2013 for 30 months.  The agreed budget for this period was 72.5 M€ of which 54 M€ was contributed by the European Union. Some part of the related Grant Agreement continued until January 2017 to finalise a supercomputer public procurement process.

There were 113 funded partners from 18 European countries in the Ramp Up Phase Grant. An additional 12 research institutions participated in the project on an unfunded basis, seven of which were from outside Europe. These were from Canada, the U.S.A. and Japan. See details on the Ramp Up Phase FACT Sheet on the CORDIS Portal.

There were 118 funded partners in SGA1 from 18 European countries. See details in the SGA1 Fact Sheet on the  CORDIS Portal.

There were 131 funded partners in SGA2 . See details in the SGA2 Fact Sheet on the CORDIS Portal.

See details in the SGA3 Fact Sheet on the CORDIS Portal.

On 1 January 2018 an infrastructure provision SGA began under which Super-Computing E-Infrastructure is being provided to the HBP Consortium through to the end of the foreseen SGA3. The agreed budget for this period is 50 M€, 25 M€ of which is to be contributed by the European Union.

There are 6 funded partners in the ICEI-SGA, including five EU Super Computer centers, in Germany, France, Italy, Spain, and Switzerland. The centers are expected to serve both HBP needs for interactive super-computing and data storage services, plus those of other European research efforts (through PRACE access) as well as national needs.

More details about the ICEI-SGA Grant including the grants made to each partner can be found in the ICEI SGA Fact Sheet On The EC's CORDIS Portal Website.